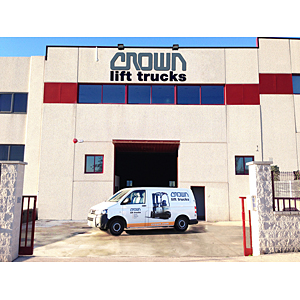 During the last few years, Crown has been steadily developing the company’s share of the Spanish market, opening a company-owned retail facility in Valencia in 2011 and a dedicated Spanish head office in Madrid in late 2012. Opening a new office in Catalonia was the next logical step, says Alfonso Valderrama, general manager at Crown in Spain.

“The Catalan region accounts for about a quarter of the Spanish market for electric forklifts by volume,” he adds. “Our new facility in Barcelona combined with our in-depth knowledge of the local market means we can now respond very precisely to our customers’ on-site needs.”

A large portion of the Crown lift trucks sold in Spain are manufactured in Germany. Crown’s service organization in Spain is supported by the company’s new parts center in Pliening near Munich, which handles the distribution of spare parts across the entire EMEA region. From the new facility, Crown makes overnight deliveries throughout Europe, shipping parts directly to service engineers’ vehicles or end customers.

“Although the Spanish economy is still in recovery, we’re convinced that the country’s economic situation will continue to improve,” says Ken Dufford, vice president Europe. “Our third facility in Spain brings us even closer to our customers and gives us the structures we need to keep pace with the growth of this expanding market.”