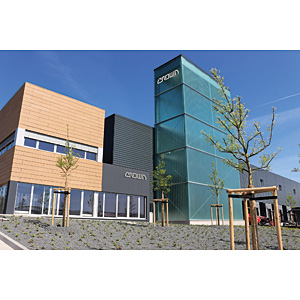 and office premises, the Roding site is one of the key production facilities in Crown’s global manufacturing network.

While the company will continue to operate the existing plant located nearby, the new facility will enable the lift truck manufacturer to significantly expand its European production capacity. Just last year, Crown opened its new European headquarters in Feldkirchen and a new parts center in Pliening, both located near Munich. The parts center handles the distribution of spare parts across the entire EMEA region. The new Roding plant represents Crown’s third major investment in Germany to support the company’s ongoing growth in Europe.

“Our new production facility in Roding is a milestone in the history of Crown in Europe,” says Ken Dufford, vice president, Europe. “Not only is the building a triumph of architectural design, embodying state-of-the-art production technology and functionality, it also conveys a powerful sense of high-tech potential, demonstrating that Crown has plans extending far into the future.”