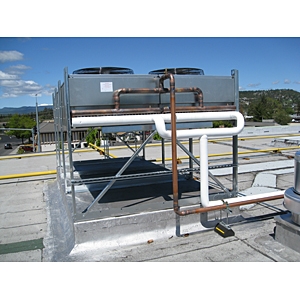 The facility stores massive quantities of foodstuffs in freezers and cooler boxes ready for regional distribution. Prior to Emerson’s upgrade work, each freezer and cooler box was controlled by a circuit with its own compressor, condenser and evaporator. These were in turn controlled by individual mechanical thermostats and defrost time clocks.

Installation of the new variable speed drives reduced electricity consumption by 250,676 kWhr per year, providing a savings of more than $2,000 a month on the customer’s energy bill. Energy savings were possible due to reduced fan motor energy consumption as a result of improved fan management, and a reduction in compressor energy consumption due to reduced compression ratios. Additional energy savings include decreased downtime, extended overall equipment life due to better temperature control and defrost management and reduced compressor cycling.

“The only option for the customer, other than a drive retrofit was replacing all the rooftop equipment for the plant, which would obviously have been a much larger capital expense,” says Ron Kvinge, branch manager for Key Mechanical Portland. “The solution suggested by Key Mechanical resulted in better control of the freezer/cooler systems, major energy savings and less wear and tear on equipment.”

“Without Emerson’s proprietary suction and head pressure controller technology, the energy and cost savings for our customer could not have been achieved,” says David Yankaskas, regional sales manager for Control Techniques. “From the perspective of day-to-day operations, controlling the HSK drives through the two Einstein RX400 controllers is obviously much simpler than having to program and monitor all 21 of them individually. Overall, the Emerson/Key Mechanical solution is functioning extremely well and is saving the customer over $2,000 dollars a month.”

Nominations open for Foodservice Distributor of the Year

Refrigeration plant optimization—freeze for less with no CAPEX