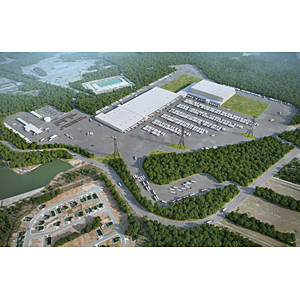 “Kroger is excited to close on 253 acres of property to build a new state-of-the-art distribution center,” says Glynn Jenkins, director of communications and public relations for Kroger’s Atlanta division. “The 1 million-square-foot facility will improve efficiencies, help the economy in the communities we serve and deliver products to our stores much more quickly. We thank Governor [Nathan] Deal, the Georgia Department of Economic Development, Forest Park Mayor [David] Lockhart and the city of Forest Park for supporting Kroger with this project.”

The Fort Gillem property was officially transferred from the Department of Defense to the city of Forest Park for this project. The city of Forest Park partnered with master developer Forest Park/Fort Gillem Implementation Local Redevelopment Authority (ILRA) to redevelop the former army base to be named Gillem Logistics Center. Primus Builders, Woodstock, Ga., was selected to provide the design-build services.

"Primus is eager to help Kroger achieve its goals for speed-to-market," says Rich O'Connell, president of Primus. "We have partnered with Kroger on several projects in the past, but this one will be the most technologically advanced for Kroger and for us. We're incorporating building information modeling, safety badging, a new safety app and other new processes on this project. We are excited to be a part of it."

The new facility is expected to create 120 new jobs, including warehouse, security, transportation management and other maintenance positions.