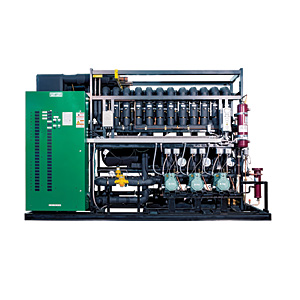 freezers without being harmful to the environment.

The new ColdLoop CO2 Subcritical System minimizes the use of HFC refrigerants in favor of CO2, a readily available refrigerant that has a GWP (global warming potential) of 1—the lowest GWP available—and is considered the baseline by which all other greenhouse gases are measured, according to the U.S. Environmental Protection Agency.

The Zero Zone ColdLoop CO2 Subcritical System is a secondary loop system that uses CO2 as the refrigerant to directly cool display cases and walk-in coolers and freezers. All medium-temperature loads are cooled with re-circulated liquid CO2, and the low temperature loads are cooled with direct expansion CO2. The CO2 is cooled with a cascade condenser utilizing R407A, an HFC refrigerant that is contained within the mechanical room at a volume that is a mere fraction of what might be used in a traditional Freon-based refrigeration system.

It is estimated that this new system has a leak rate potential of 5% per year, compared to an average 25% leak rate for traditional systems.