Crown Equipment Corp. completed construction of a new office building at its global headquarters in New Bremen, Ohio. The 44,400-square-foot building is located 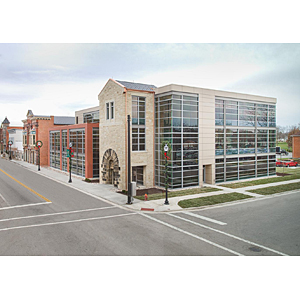 on the site of the historic Boesel Opera House, which was damaged by a fire in February 2012 that destroyed the interior of the building.The new facility houses marketing, sales, service and branch operations teams.

Crown incorporated a number of features of the original building that were not significantly damaged by the fire, including much of the exterior framework and ceiling beams. The lobby of the new building also features the original tile floor from an historic New Bremen hotel.

“The fire that destroyed the opera house was an event that impacted our community and our employees,” says Mark Manuel, vice president. “As the primary employer in the area and in alignment with a company tradition of brownfield development, it was important that Crown took a lead role in the redevelopment of the space and reclamation of as much of the opera house as possible. The new facility is the result of collaborative efforts among many organizations. It stands today a testament to the perseverance of our community and Crown’s commitment to the future of New Bremen.”

In keeping with Crown’s commitment to environmental sustainability, the building features a number of environmentally friendly construction and design elements, including smart glass technology, which electronically tints windows in response to outside conditions, thus eliminating the need for shades or blinds and allowing for better utilization of natural lighting. The interior of the building features an open-air design with an emphasis on more open workspaces and fewer offices, further enhancing the use of natural lighting.