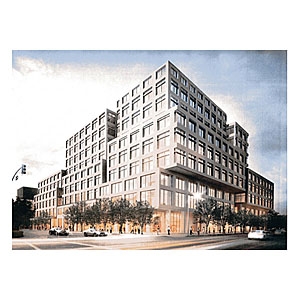 The food processing company filed “preliminary” plans and renderings—the first look at how the entire property will look when all elements are completed in 2016—for approval by the city’s Design Review Committee, which will hold a public hearing Aug. 14. The new building will consolidate about 1,000 Simplot employees from the One Capital Center building at 999 Main St., which has been the Simplot headquarters since 1975, and its Food Group building on Federal Way, built in 1992.

Bringing its Boise employees together “will strengthen our culture of innovation... in a more collaborative work space,” says Bill Whitacre, president and CEO.

The company’s building will be a companion to JUMP—Jack’s Urban Meeting Place—a project in J.R.’s memory being built by the Simplot Foundation to include a museum, park areas, public art and performance and meeting spaces.