Yogurt Made from 100% Grass-Fed Cows 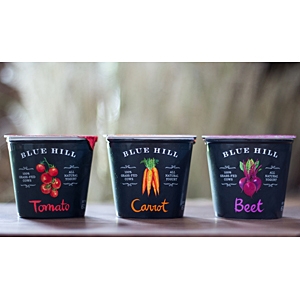 “Blue Hill Yogurt was born in the kitchens of Blue Hill New York and Blue Hill at Stone Barns, where my brother Dan Barber and his culinary team have been experimenting with grass-fed milk yogurt for years,” says David Barber, president and co-owner. “The first savory yogurt dish at Blue Hill was ‘Savory Granola with Beet Yogurt;’ it sparked the idea for this entire line.”

The line is available in select Whole Foods in the Northeast, with other flavors, including limited-edition seasonal yogurts, available later this fall. All yogurt varieties have a suggested retail price of $2.99 each.

Grass-fed ground beef from just one steer per pack