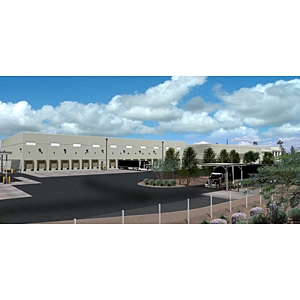 ground on a 37,500-square-foot expansion in April 2012, and now totals more than 83,000 square feet. The facility serves 375 restaurants, including McDonald’s and Chipotle, throughout Arizona, Utah, California, New Mexico and Nevada. Th Phoenix facility marks the third expansion this year, with a McCook, Ill., distribution facility breaking ground in June, and a grand opening for the company’s Whitewater, Wis., distribution facility in August.

“Our newly expanded facility will create the necessary infrastructure to ensure Golden State Foods is able to provide McDonald’s and Chipotle with the quality of service they require today and into the future,” says John Marin, general manager of the GSF Phoenix distribution center. “We are committed to continue to offer the superior quality our customers know us for, and are grateful for all of those who were involved in the planning and building process for the new facility.”

In addition to increased square footage, the expansion will bring the installation of several eco-friendly features, including translucent insulated panels that provide natural lighting in the cool dock area, Xeriscape (low-water usage) landscaping and a cascade refrigeration system that reduces ozone-depleting refrigerants.