For those companies reliant on the Panama Canal, its expansion project may pose a series of hiccups in intermodal plans. 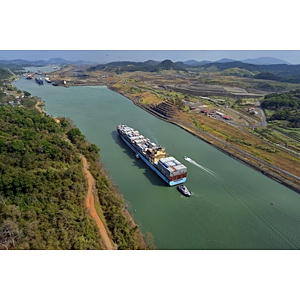 Refrigerated & Frozen Foods spoke exclusively with the Panama Canal Authority to discuss what the expansion project is, what it entails and how it impacts the refrigerated and frozen foods industry. Here's what the industry needs to know.

Refrigerated & Frozen Foods: What is the Panama Canal expansion?

The program also entails the widening and deepening of existing navigational channels in Gatun Lake and the deepening of Culebra Cut. In order to open a new 6.1 km-long access channel to connect the Pacific locks and the Culebra Cut, four dry excavation projects will be executed.

R&FF: What is the status on this project?

Panama Canal Authority: As of Sept. 10, the Panama Canal Expansion Program has made a significant stride forward as it reached 3 million cubic meters of concrete poured in the construction of the new lock complexes for the expansion program.

The milestone was registered during the construction of the new locks in the Atlantic side, specifically in the second monolith located in the east wing wall water outlet. The wing walls are located at the opposite ends of the lock complexes, where the enormous culverts that are part of the lateral filling and emptying system of the locks finish. The term monolith refers to each of the sections in which the lock walls are being divided to facilitate their construction.

The wing wall outlet is located next to the ocean, where the water used for each transit is finally released into the ocean. The wing wall water intake is located on the end facing Gatun Lake, where water is drawn to fill the lock chambers for vessel transits.

Since the wing wall structure will be permanently exposed to sea water, a marine structural concrete mix was used, providing a greater protection to the reinforcement steel in the presence of chlorides.

The new lock complexes will require more concrete than the 3.4 million cubic meters used for the current Panama Canal since they are 60% bigger.

As of mid-August, the Expansion Program is 64% complete. It will build a new lane of traffic along the Panama Canal through the construction of a new set of locks, which will double tonnage capacity to face the demand of world maritime trade.

R&FF: How does the expansion impact the intermodal industry?

Panama Canal Authority: To the United Nations, Panama is the Latin American country with the greatest connectivity. The canal builds upon this strategic resource—Panama’s geographical position—by promoting access to 144 maritime routes and connecting 1,700 ports in 160 countries.

Panama’s connectivity is powered by ports in two oceans, an intermodal airport with connections to more than 30 destinations in 20 countries of the Continent, an ocean-to-ocean railway, a telecommunications network of the most up-to-date technology and a financial and commercial services center of international quality.

R&FF: How will companies shipping chilled and frozen foods benefit from this expansion?

Panama Canal Authority: The Panama Canal, with its unique location at the narrowest point between the Atlantic and Pacific Oceans, has had a far-reaching effect on world economic and commercial developments throughout most of this century. By providing a short, relatively inexpensive passageway between these two great bodies of water, the canal has influenced world trade patterns, spurred growth in developed countries and has been a primary impetus for economic expansion in many remote areas of the world.

The expansion program will build a new lane of traffic along the Panama Canal through the construction of a new set of locks, which will double capacity and allow more traffic and longer and wider ships. The expansion will allow the canal to uphold its position as a reliable route at the service of international commerce.

R&FF: Name 5-10 things the food industry needs to know about the Panama Canal expansion, including challenges, changes in traffic, etc.

• The expansion will extend the canal’s area of influence.

• The USG-Asia grain trade will take advantage of expansion, but probably only to vessels of under 100,000 dwt. Likely to benefit canal routes to remain lower cost than the WCUS gateway.