RAVAS, the Netherlands, introduced a series of mobile weighing systems that integrate weight information into an IT network. 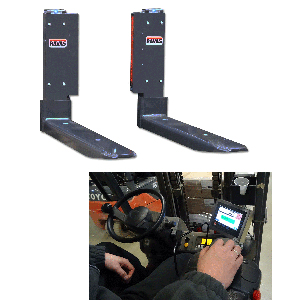 For example, iForks Touch is equipped with the RAVAS touch-screen indicator, and offers advanced functionality and different ways of connectivity with a warehouse management or ERP system. The touch-screen indicator has a programmable user interface for optimal user friendliness. Different scale applications can be called up over the touch-screen, including weighing, data inputs, totalizing, etc. The display only shows those keys which are relevant to the app in use. iForks Touch also offers extra connectivity options. For instance, the touch indicator has two available COM ports, so both a wireless connection and a printer can be installed. The indicator also has a USB port for universal off-line data storage on a USB stick. Once equipped with a level sensor, iForks Touch can actively calibrate for out-of-level fork positions when tilting the lift truck mast forward or backward. This makes for higher accuracy, more user friendliness for the lift truck driver and even less interruption of the process.

The ProLine Touch weighs loads in 100-gram increments and is suited for use in the food industry, supply chains and more. This off-the-shelf solution helps users determine weight and volume in one go—mobile weighing and dimensioning integrated, which means measuring dimensions of a package or pallet. The outcome is called the volume. The combination ProLine touch pallet truck scale and Cubetape is the ideal solution for determining weight and volume because it has been designed to operate with existing PDA and PC infrastructure.

A double scale orderpicker carries two pallets on two separate scales, allowing a WMS to check for picking errors online. For preventing picking errors, each of the two pallets is weighed separately, each on its own scale. This allows the WMS to check the weight of each order line, checking for picking errors, but also to check whether the articles have been added to the correct pallet. Errors are signalled in real-time and immediately corrected at the picking slot. The double scale order picker is accurate to 100 grams thanks to the patented FlexBolts, which absorb longitudinal and torque forces. This technology ensures that a load on the forks is optimally transferred onto the load cell sensors and therefore measured as accurately as possible.