The Kroger Co., Cincinnati, is said to be the first in Oregon to deploy a fleet of heavy-duty trucks that run on liquid natural gas (LNG). The 40 trucks will replace 40 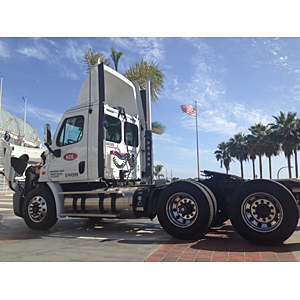 diesel trucks currently in use, and are expected to start making store deliveries in the Portland metropolitan area by the end of 2014.

The use of natural gas fuel not only reduces operating costs for vehicles, but also reduces greenhouse gas emissions up to 23% in medium- to heavy-duty vehicles.

"This is the first step in Kroger's effort to transition our fleet to alternative fuels," says Kevin Dougherty, group vice president and chief supply chain officer. "Converting to LNG trucks will allow us to reinvest savings into lower prices for our customers while also benefitting the environment."

The trucks will make deliveries to about 50 Fred Meyer and QFC stores as far south as Corvallis, Ore., and as far north as Longview, Wash., averaging approximately 175 miles per day, six days a week, 52 weeks a year. They are expected to reduce greenhouse gas emissions by approximately 755 metric tons per year, which equates to removing approximately 159 passenger cars from the road annually. The fleet will be fueled at a new, private LNG fueling station at Kroger's Clackamas Distribution Center, which will be designed and engineered by Clean Energy Fuels Corp., Newport Beach, Calif.

"These trucks are nearly identical to our diesel fleet, which allows us to have minimal impact on operations and still achieve the same caliber and standard of performance," says Matt Hoffman, regional logistics director based in Portland. "They are truly the prototype truck of the future—the safest, cleanest and quietest way for our hard-working drivers to deliver product to the stores."