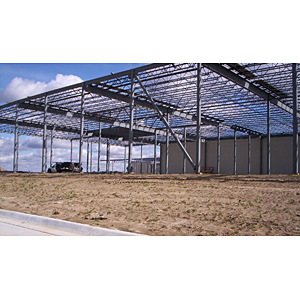 “ALDI relies on its regional distribution facilities to supply product to its more than 1,300 stores,” says Eric Fix, A M King’s project manager for the Webberville site. “We understand how important it is to help ALDI expand without impeding their ongoing operations, and this requires a significant level of planning and coordination. We must also provide accurate logistics and schedule management to maintain a proper separation between construction activities and any food products entering and exiting the facilities.”

The project teams for both Webberville and Saxonburg also anticipate certain challenges inherent in large and complicated projects, and have planned construction accordingly. This includes dealing with issues such as unsuitable soils, rigorous permitting and approval processes and harsh weather.

“In both locations, we are adding significant areas of dry warehouse and freezer space, renovating existing spaces and expanding parking areas,” says Carl Morse, A M King’s project manager for the Saxonburg site. “Applying a fully integrated design-build approach allows us to deliver these projects at the greatest value to our client. For example, both of these expansions are being built on difficult soils. Our engineering and construction teams, working together closely, developed innovative foundation designs, which mitigated potential schedule and cost impacts.”

“One of the highest compliments we can get from a client is repeat business,” Morse says. “We are thrilled about the relationship A M King continues to build with ALDI as their company grows, and we look forward to seeing these two major expansions to a highly successful completion.”

Brad Vesterby, Director of Sales at Firestone Pacific Foods, Passes Away After Battle with Cancer

Check out the January 2021 edition of Refrigerated & Frozen Foods, featuring the 2021 Refrigerated Foods Processor of the Year, Greenleaf Foods; read about the company and the plant. Also, we have alternative proteins, cold storage and COVIC-19 vaccines, new retail products, and much more!