Conrad & Adams Fruit, LLC, Grandview, Wash., has been growing and packing premium quality cherries for the United States and other global markets since 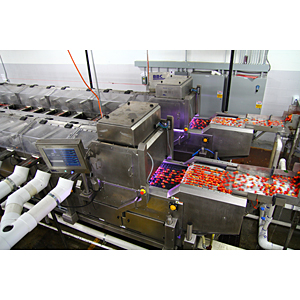 2008. In 2012, it partnered with BBC Technologies, South Haven Charter Township, Mich., to automate its sorting and packing processes.

In keeping with its commitment to service along a customer-centric approach, BBC installed a trial MIRA-360 cherry sorter in 2013. BBC staff then worked hand-in-hand with the U.S. cherry supplier to adjust the equipment to meet the client’s ambitious targets for throughput, accuracy and compliance with industry standards in respect of defects, color and sizing.

The MIRA-360 Cherry Sorter uses smart technology to identify and remove cherries with defects such as cracks, splits, soft rot, wrinkles, bruises and insect damage. It also sorts for color and into multiple streams by size.

A key advantage for Conrad & Adams is the compact size of the equipment (standing at just 3-feet wide), which is said to take up less than half the space that many conventional sorter machines occupy.

“This was crucial for Conrad & Adams, as it moved to electronic cherry sizing, as our technology fitted easily into the company’s existing packhouse,” says Paul Birchall, U.S. sales manager for BBC.

Other features of the MIRA-360 equipment include seamless customer interface and the ability to provide information about fruit quantity and quality, which helps Conrad & Adams make informed decisions.

The results
Conrad & Adams’ initial goal was to achieve throughput of three tons an hour, a target that was easily exceeded in the first few weeks of operation. Conrad & Adams is now on track to double the volume of cherries it handles, without having to take on more staff in its packhouse.

The companybenefits from a higher quality offering as a result of increased accuracy in sorting for defects and enjoys better returns for premium Rainier cherries. BBC’s sorter can accurately pick out the valuable, high-blush Rainier cherries that fetch top prices, a task which previously had to be done by hand.

Conrad & Adams is buoyed by the potential flow-on effects of its investment. Increased capacity at Conrad and Adams’ facility means the company can pack for more growers who, in turn, can expand their cherry plantings.

“Partnering with BBC is delivering solid growth for Conrad & Adams,” says Gene Gifford, general manager. “It’s not only reducing our costs and giving us greater assurance around the quality of our cherries, [but] it’s also creating momentum for growth in the wider industry throughout our region.”

The future
Both Conrad & Adams and BBC are committed to a long-term partnership.

“BBC’s willingness to work closely with us, over many months, to understand our business and adapt its technology to our needs has given us great confidence,” says Gifford.

And, a key part of being able to provide that has been the integrated support from the wider BBC team.

“Part of the strength of our offering is having someone like me on the ground, backed up by our research and development and technical support staff back in New Zealand,” says Birchall.

Conrad & Adams will be continuing its investment in packing and packaging technology and is exploring a full range of turnkey solutions with BBC to support its future growth.

“There is substantial growth taking place in the cherry industry, both in the United States and other parts of the world. Our value-driven partnership with Conrad & Adams illustrates how customers can ride that wave using smart technology to get ahead,” adds Geoff Furniss, chief executive officer of BBC.