Cut Mixing, Marinating Time in Half

As processors of prepared foods are continually challenged to meet higher product quality standards, they are often simultaneously confronted with other 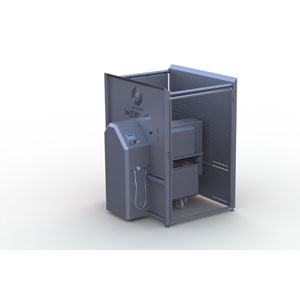 demanding issues, such as how to improve on production throughput, product consistency and safety—all while containing capital investments.

One of the prevalent processes that can be a source of time- and money-consuming inefficiencies in the production of prepared foods is mixing, blending and marinating. This applies to fruits and vegetables as well as foods such as seasoned meats, poultry, seafood, mixed foods such as rice and vegetable dishes and deli salads.

The traditional approach for many processors has been to use equipment containing blades or other mechanical agitators, or even a combination of machines, to mix or blend products. In some operations, workers perform manual mixing with paddles. Either way, the process can be overly cumbersome, time-consuming and costly.

Also problematic, those traditional mixing and blending methods can damage the finished product by crushing fruits and vegetables, bruising meats and breaking pastas. Moreover, when multiple pieces of equipment are involved, the risk of poor hygienic standards is increased as well as the need to wash and sanitize more equipment.

Today’s food processors, especially those who see the value of process integration, are beginning to focus on a more advanced mixing and blending technology as a way to save money and increase throughput and food quality. Such technology gives processors the ability to mix products quickly and hygienically, yet do so without causing product damage.

An optimum mixing solution
Summer Fresh Salads, an Ontario, Calif., producer of gourmet dips, appetizers, salads and chef-prepared foods, was looking for a more efficient and consistent way to mix and blend its line of deli salad dishes, such as pasta, rice and potato salads as well as its line of pre-packaged gourmet products, including Greek pasta salad and summer Rotini salad.

“We wanted a system that would mix the salad ingredients quickly and efficiently, while also protecting ingredients such as pasta from bruising or other damage,” says Michael Leibold, senior director of operations.

Previously, Summer Fresh Salads was mixing its salad products “by hand,” using time-consuming and costly manual labor with paddles. If not performed precisely, the paddles could crumple some delicate products, or possibly affect the consistency of products.

“We are a very quality-conscious company, so we researched automated systems that would ensure that product integrity would not be compromised, and that product throughput would increase,” says Leibold.

The system that Summer Fresh Salads decided on is the GBT300 Buggy Mixer and Tumbler from CM Process Solutions, a Corona, Calif., supplier of food processing, washing and hygienic systems.

The GBT300 is designed for tumbling, mixing and marinating a wide range of products, including meats, vegetables and salads in a 400-pound stainless-steel buggy. After being loaded with product ingredients and spices, each buggy is wheeled to the machine where it is lifted into a position that allows it to rotate in a tumbling fashion according to a pre-set recipe input by an operator at the control panel. A vacuum seal prevents any products from spilling out of the buggy.

“The product is very easy to use,” Leibold says. “It will do a 100% mix in as little as one minute, depending on the recipe—much faster than mixing manually, which is relatively time consuming. The salads are mixed very evenly, and there is no bruising or deterioration of product integrity.”

"Not only does it provide Summer Fresh Salads with a superior and better mix, it also contributes to employee health and safety with the reduced risk of back strain from an arduous manual task that comes with employees mixing by hand," adds Mark Corser, president and owner of CM Process Solutions.

Although Summer Fresh Salads does not use the equipment for marinating, the same benefits are enjoyed by food processors that do. According to CM Process Solutions, many of their customers are mixing and marinating meat products within five minutes, cutting the time consumed by more than half. The optional vacuum system facilitates marinating at higher-than-normal speeds.

"We recently supplied the GBT300 to a leading pork processor who uses it to tumble and marinate products such as Peppercorn Tenderloins and BBQ loin fillets,” says Corser. “The results were outstanding; we were achieving an efficient tumble and marinate of products within minutes."

Integrating the solution
Another benefit of automating the mixing process into a single system is that it can be more easily integrated into the process line, including automated washing and sanitizing of the buggies used by the mixing system.

Hygiene mandates in food production facilities continue to be a critical focus of processors and regulators, so integration of automated washing and sanitizing equipment into the production stream can have a synergetic effect, saving additional time and money.

“CM Process Solutions is pretty famous for its line of washing and sanitizing equipment,” says Leibold. “They have provided us with a hand-and-boot wash system, as well as several buggies and buggy lifters.”

The 400-pound wheeled buggies that are used for mixing by Summer Fresh Salads are washed and sanitized automatically. Quick turnaround of clean buggies eliminates the need for added buggies, while also saving considerable cleaning time and the labor associated with it.

“As far as the mixer is concerned, we’ve already bought a second one, and are waiting for it to be delivered,” says Leibold.

He adds that there is a human benefit to using this type of automation equipment.

“Mixing by hand is difficult, ergonomically. Some workers would complain about upper back pain after mixing by hand all day long,” he adds. “Now the operator just pushes a button. Plus, one person can handle what six people would do when the task was performed manually.”

Corser adds, "The machine comes with many pluses, by mixing the product within the buggy, there is less handling; usually mixing is achieved in large paddle blenders where the recipe ingredients have to be loaded multiple times by column dumpers, and after mixing are discharged into another buggy. By using the GBT300, you are mixing the product within one buggy, which not only cuts down the mechanical handling but also the amount of containers that need to be washed and sanitized after the production process, thus saving on energy and water costs".

Kraft to cut supplier base in half