Do You Know Where Your Containers Have Been?

No food processor would knowingly permit pathogens or other contaminants to enter the processing plant. Yet, when they allow packages containing outsourced food ingredients to be received without being sanitized, they take similar risks. The end result could be finished food products that were exposed to pathogens or other contaminants, potentially causing consumers harm, product recalls and ensuing consequences such as tainted brand names and even costly litigation.

“The packaging that contains ingredients for foods such as ready meals might have been exposed to any number of unwanted substances,” says Mark Corser, chief executive officer of CM Process Solutions, Corona, Calif. “This is particularly the case among U.S. manufacturers of ready meals and fresh foods such as sandwiches and salads, or heat-and-eat items such as fresh (unfrozen) pizza.” 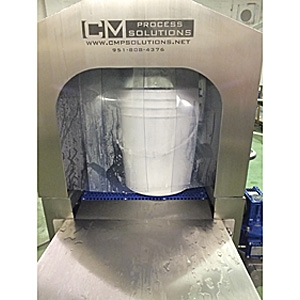 The problem, Corser says, is that when ingredients such as cheese, dough, shrimp or other outsourced ingredients are shipped with their outer packaging, whether buckets, bags or cans, that packaging is exposed to dirt, chemicals and other contaminants that are present in delivery trucks or other forms of transportation.

This problem exists throughout the United States because sanitizing containers coming into food processing plants is not a common procedure, yet most plants employ sophisticated washing and sanitizing equipment. For example, many U.S. plants have sophisticated, automated washing systems that clean the buckets, trays and other vessels that are used to convey foods throughout the cooking and/or finishing processes. However, when it comes to containers that are delivered to the processor’s plant, a thorough sanitizing operation is often missing.

“This is strangely an American problem,” says Corser. “I say that because in the U.S., many food processors are using highly advanced technologies throughout their plants, but when it comes to sanitizing containers as they come to the plant that is often overlooked.”

“There is not always a clear understanding when we are talking about the areas of low risk and high risk or high-care areas in the food processing plant,” says Farzad Shahsavarani, vice president of operations for fresh food solutions at Flying Food Group (FFG), Chicago. “Keeping foods free of contaminants requires a lot more than just walls and doors and traffic flow. Some processors don’t realize that contaminated containers entering the plant are exposing their products to environmental impurities and possible pathogens.”

“In the food processing industry, there is largely self-policing about this,” he says. “However, in the U.S., that is not a routine practice. But, in the future, it is very likely that higher global safety standards like GFSI [Global Food Safety Initiative] will come into play. This would include sanitation of food packaging.”

What is needed is a fail-safe system that provides assurance that containers are fully sanitized on all sides before they enter high-risk or high-care areas of the processing plants. Typically, this would be an automated system, such as a conveyor belt and spray tunnel that sanitizes packages of all types with a uniform concentration of sanitizing solution as they travel from low-risk to high-risk or high-care areas.

Automated sanitizing
In Europe, this type of sanitizing equipment is often called a “barrier tunnel” or “sanitizing tunnel.” The tunnel is a conveyor belt-driven system that sprays a mixture of water and a sanitizing agent to disinfect the containers before they are sent into the food processing plant and opened. Sanitizing sprays are normally composed of a mixture of water and ½-1% detergent formula. Although most detergents kill bacteria and other biologicals on contact, a formula is available to protect containers that are likely to be stored for hours or even days.

A variety of sanitizing tunnel sizes and configurations are available, including design-built customized models. A good example of a typical system is the Econosan distributed by CM Process Solutions.

The Econoscan conveys the container through a tunnel where a solution of sanitizing detergent is misted onto the items from top, bottom and sides. The speed of transit through the tunnel can be set and easily adjusted to operate at between 3-12 feet per minute, according to the user's requirements. The water used in the process is recycled, and detergent is continually topped off after the water is recycled.

“The system is economical and easy to use,” says Corser. “Although the Econoscan is an entry-level system, it is a heavy-duty performer and requires very little maintenance or other service.”

Price is sometimes a consideration with food processors, although American companies have a tendency to invest capital where reasonable returns are expected.

“Although this kind of equipment doesn’t contribute directly to profits, it certainly qualifies as a good insurance policy against potential recalls for any container-borne pathogens or other contaminants from getting into finished food products,” Corser adds. “Also, the equipment will last for 20 years, so if you amortize the cost over that period, it will hardly be noticeable.”

HPP Tolling 101. Here’s What you Need to Know

Time to do your homework

Your Supply Chain is only as Safe as the Weakest Link