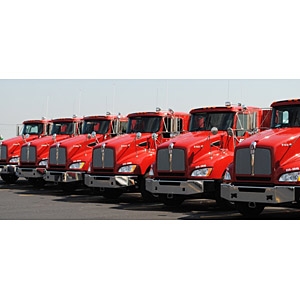 Under the agreement, AMP-Trillium, the joint venture between AMP Americas and Trillium CNG, will build seven public fueling stations between October and early 2014 and lease new CNG trucks that will travel more than 13.2 million miles per year, servicing routes throughout Texas. The stations, which will be built in Waco, Amarillo, Harrold, Sweetwater, Weatherford, Kerrville and Midland, Texas, will initially fuel 40 new Class-8 Kenworth and Peterbilt CNG sleeper trucks, a number that will double over the course of the agreement.

“It is estimated that the culmination of this deal will displace carbon emissions equal to removing 2,400 cars per year from the road, and will save the supply chain $1.50 to $2 in fuel savings on every gallon sold,” says Nathan Laurell, chief executive officer of AMP Americas. “It lets us build a network of public, fast-fill CNG stations across all of the major Texas corridors that can be used by any fleet running trucks across the state.”

The deal structured by AMP Americas features beneficial contract terms for fleets operated by Western Dairy Transport and Reynolds Transport, establishing the two as “first-movers” by operating two of the largest 12-l Liter commercial CNG fleets in the United States.

CNG is domestic, abundant and about 40% less expensive than diesel. It reduces dependence on foreign oil and has significant environmental benefits. Because it is said to be the cleanest burning fossil fuel, CNG cars and trucks require less vehicle maintenance and enjoy a longer engine life.