Norfolk Southern, Norfolk, Va., and GoRail, a non-profit grassroots organization dedicated to educating the public about the benefits of moving more freight by rail, 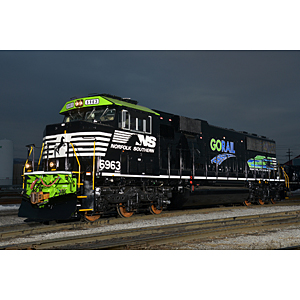 Founded in 2004, GoRail mobilizes support for policies that would lead to more freight moving by rail and opposition to policies that would limit the freight railroads’ ability to meet growing freight demand. The GoRail locomotive will enter into regular freight service on Norfolk Southern’s system.

“We are honored that Norfolk Southern has commissioned this special GoRail locomotive and are excited for its debut,” says Russell McGurk, president of GoRail. “We believe it will help GoRail spread awareness about the many public benefits of rail, including more jobs, improved safety, less pollution and less energy consumption. When the public understands that America’s privately owned freight railroads invest billions of dollars each year in the nation’s rail network so taxpayers don’t have to, they are eager to get behind pro-rail policies.”

The SD60E model features a paint scheme combining the infinity lines of the Norfolk Southern livery with the tracks of the GoRail logo. The lines end in an arrow to depict movement, and the GoRail colors carry through the modified speed lines to show the unity of GoRail and Norfolk Southern, creating the look of land as seen from above and signifying freight movement.

The GoRail locomotive joins Norfolk Southern’s 30th anniversary fleet of 20 non-traditional locomotives painted in the schemes of key predecessor railroad companies and the veterans’ locomotive painted to honor those who have served in the military and reserves.

“Our industry has a great story to tell, and GoRail does an excellent job of educating the public about the benefits and strengths of the American freight rail system and the continuing high levels of freight rail investment to drive safety, service and growth,” says Wick Moorman, chief executive officer of Norfolk Southern. “We are pleased to help promote GoRail and their pro-rail mission.”

Norfolk Southern acquires 282 miles of rail from PA to NY