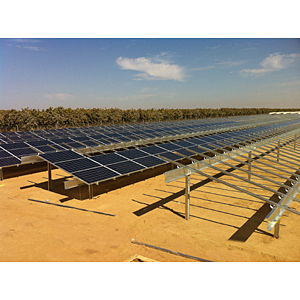 expected to offset 75% of the farm’s energy use at its cold storage facility while reducing its carbon footprint.

The installation of the solar energy system is the capstone of the farm’s comprehensive sustainability portfolio, which includes on-site recycling of growing materials, drop irrigation to preserve water and composting to enrich crops and reduce waste. Vignolo Farms, a third-generation, family-run farm that produces wine grapes and organic potatoes, is a leader in sustainable agricultural practices.

REC Solar completed the installation on time and on budget, while working around the demands of a working farm. In addition to Vignolo Farms, REC Solar installed solar systems for more than two-dozen large and small growers and cold storage facilities throughout the state, including Delano Growers, Peter Rabbit Farms and Amaral Ranches, many of which are family-owned farms in the Coachella and Imperial Valley regions.

“We’re working with a growing number of organic and sustainable farmers deploying solar energy not only out of a deep commitment to the land but also because of the clear business benefits,” says Ryan Park, director of business development for REC Solar. “Vignolo Farms is setting an example for California farms who want to dramatically reduce their energy output and lead the way in sustainable agriculture.”