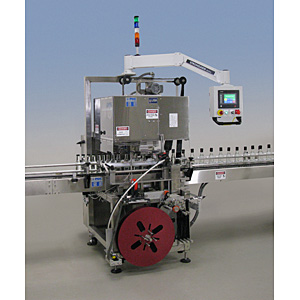 Ideally suited for shrink sleeve labeling, the sleeve label extends over the cap with a horizontal perforation for tamper evidence on jars, bottles and other containers.

The machinery also performs tamper-evident banding around the upper portion of a container and its closure, and applies full-height safety seals.

All 65 Series Shrinksealers use PDC's patented blade assemblies, which operate dust-free and prevent the "hairs" that plague spinning knife devices. Also, PDC blades can be repeatedly re-sharpened and are reversible, so a single set provides double the value. They are compatible with all major sleeving and labeling films, including PVC, PET, PETG, PLA and OPS.

All-in-one tunnel with own steam generator for shrink labeling