At the converted dennree refrigerated warehouse, its refrigeration systems for dairy products, fruit and vegetables enable sustainable, economical and long 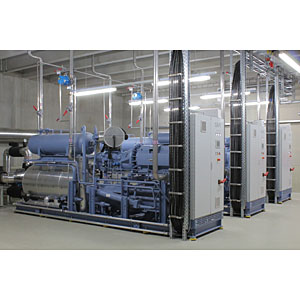 service life. dennree, a wholesaler of organic foods and beverages, converted an existing warehouse to four refrigerated bays with efficient and environmentally friendly refrigeration systems. In the machine building for above-freezing refrigeration, advanced GEA chillers operate with ammonia, the natural refrigerant (R717). The refrigeration systems use brine to assure the required temperatures.

For the expanding organic wholesaler dennree, with home offices in Töpen, Bavaria (Germany), the issue of sustainability plays a prominent role. For the energy-intensive cooling of its fresh food products, the company now counts on refrigeration technology that uses ammonia as refrigerant in its machine building. Instead of building a new refrigeration complex from scratch, dennree took advantage of buying the existing central warehouse of a neighboring discount operation. dennree then converted and expanded this building as a 4-bay complex with four separate cold storage facilities. Since April, an ammonia refrigeration system for non-freezing refrigeration (6°C) has cooled three of these bays, with total floor space of 21,000 m². The fourth bay, with 4,000 m² for meat and sausage products, has its own propane refrigeration system, which assures a storage temperature of 2°C.

The dennree central warehouse in Töpen accepts delivery of fresh products six days a week. These goods remain in storage no longer than 48 hours. From Sunday to Friday, orders are picked for each of the following retail business days. Around 98% of goods for German organic retail dealers is picked at dennree with the use of roller containers, and is transported in the 130 trucks operated by  dennree to customers not more than 24 hours after order. Every day, around 3,800 roller containers leave the dennree refrigerated warehouse.

The new dennree refrigerated warehouse complex stores around 2,000 open and packaged milk products and 550 various types of fruit and vegetables at 6°C. Separate storage, at different temperatures, takes place in special areas, i.e., apples at 4°C, tomatoes and cucumbers at 10-12°C, bananas at 14.5°C and potatoes and root vegetables in the dark at 7°C.

Gutting and converting the logistics building
In the first step of its conversion project, dennree completely gutted the old logistics facility, including its floor. It also removed the previous multi-compressor refrigeration system (seven compressors), which served only part of the old facility. dennree then insulated the building shell, erected a new machine building and installed the extensive piping system for the brine. A suspended ceiling was then installed, which created an intermediate level that supports human traffic, accommodates the supply piping for the brine coolers and provides space for the fire-protection system (sprinklers). The fourth building bay and the propane refrigeration system were installed as completely new units at the outermost existing bay of the warehouse complex. The heat emitted by the propane system warms the new intermediate upper level over the suspended ceiling to at least 6°C. This prevents freezing of the sprinkler system in winter. Also, three air-cooled condensers on the roof of the machine building dissipate the heat emitted by the ammonia process.

In making their investment for the new refrigeration system, long service life, high levels of availability and energy efficiency remained top priority. That’s why dennree management chose a technical system that can be flexible and continuously matched to fluctuations in refrigeration demand in accordance with the seasons of the year and logistical constraints.

As a result, dennree selected Weska Kälteanlagen GmbH from Netzschkau, Germany, as project partners for planning and installation. Weska was responsible for the overall concept, project engineering and dimensioning of all facility components and installation of the technical plant. Weska also delivered the piping system for cold room refrigeration with Hycool brine. The entire conversion and new installation of the refrigeration systems lasted approximately nine months. The ammonia chillers have been in operation since the spring and have provided flawless service, also during high-summer outdoor temperatures of over 30°C.

How GEA Grasso BluAstrum chillers provide refrigeration duty
In the new sound-insulated machine building, three identical GEA Grasso BluAstrum 1000R chillers furnish cooling duty of up to 2,400 kW required by the three refrigerated warehouse sections for dairy products, fruits and vegetables. Ammonia systems were installed only in the machine building, since Hycool brine is used as a secondary refrigerant in the cold rooms itself. According to Secon, the Germany-based manufacturer of Hycool, this brine is an environmentally friendly and highly efficient fluid with great thermal capacity and low viscosity. It is based on formates and a highly advanced corrosion inhibitor, and is non-toxic, non-explosive, non-flammable and biologically degradable.

How it works is, the brine circuit is cooled by the ammonia evaporators of the chillers. The volume of the brine circuit is designed to enable compensation for even major fluctuations in demand on cooling capacity. The brine, with a volume of 55 m³, serves by its mass alone as a thermal “storage tank,” and as a result, eliminates the need for frequent start/stop cycles of the compressors. Under fluctuating cooling demand, six speed-controlled, 30-kW brine pumps assure a constant pressure difference in the brine network between the supply and return lines. The supply temperature of the brine is -3°C and the return +2 °C. The temperature difference between refrigerant and brine discharge of only 2K contributes significantly to the efficiency of the entire facility.

Distribution of the brine as secondary refrigerant to the consumers and back to the machine building takes place through a piping system approximately 3,500 m long. The refrigerated facility is also home to 56 air coolers, on duty with 4-80 kW (Hycool inlet and outlet temperatures: -2°C to +3°C).

For each cross aisle, there is one air cooler at the longitudinal walls of the hall, installed near the ceiling, alternating at each of the two outer walls. This offers the advantage that the cooled air flows by alternation into the center of the hall, which results in enhanced temperature distribution in the hall. In addition, this configuration means that the workers—while they are stocking or removing the goods at temperatures of 6°C—always experience a tailwind and never a headwind in addition to the wind experienced while driving a forklift. The brine coolers do not dehumidify the air in the hall, which means that relative humidity of around 50% prevails in the warehouse.

This excellent energy efficiency is largely a result of effective speed control by the frequency inverters of the screw compressors installed. The average European seasonal energy efficiency ratio (ESEER) of the GEA Grasso BluAstrum is 8.0. The three chillers run alternatively in accordance with demand in such a manner as to achieve a balanced number of operating hours for the three chillers. During the winter, in low-load periods, one unit is sufficient to provide the required cooling duty. During hot summer periods, the entire installed capacity is required. Maintenance work is of course scheduled for the cooler times of year; by distributing the entire output over the three chillers, service is possible without downtimes in production.

Ammonia as refrigerant
The use of ammonia as refrigerant (R717) also contributes to the great efficiency of the dennree refrigeration plant. As a result of its physical properties, ammonia currently offers the best EER. In refrigeration processes, these characteristics of ammonia enable outstanding efficiency without contributing to the global warming potential (GWP = 0) and without harming the ozone layer (ODP = 0). The use of ammonia also significantly contributes to the low total equivalent warming impact of such facilities (calculated in the TEWI value, the equivalent warming contribution in kg of CO2). TEWI calculations for ammonia systems have revealed CO2 savings of almost 50% over conventional refrigeration systems based on the use of hydrofluorocarbons (HFCs).

The GEA chiller control system sends the operating parameters and periods via Profibus to the higher-level control system. This system transmits fault alerts by email to the service staff. The software tool VNC provided with these systems also allows remote access to the facility. This means that direct access to the control system is possible at all times without entering the site itself. In the highly unlikely case of total failure of all three chillers, it would be possible on short notice to connect an emergency leased refrigeration facility to the brine network.