This website requires certain cookies to work and uses other cookies to help you have the best experience. By visiting this website, certain cookies have already been set, which you may delete and block. By closing this message or continuing to use our site, you agree to the use of cookies. Visit our updated privacy and cookie policy to learn more.
Home » IQF Freezer Helps Berry Processor Achieve Long Run Times During Harvest Season
Case Studies 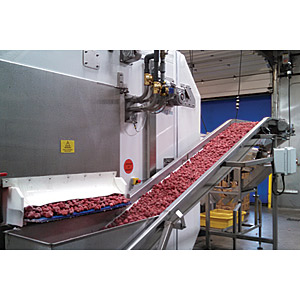 “For us it was an easy choice,” says Scott Dunn, operations manager for Willamette Valley Fruit. “We do not have the luxury of a huge processing facility with lots of extra square footage for equipment. The footprint of the OctoFrost was much smaller than other freeze tunnels with the same throughput capacity. So, it just fit best. In addition to that, we were drawn to the idea that we could control fan speed and bedplate agitation, which would give us an advantage in freezing fragile fruit.”

Manufactured by IQF Frost, Inc., San Jose, Calif., the OctoFrost is easy to operate, offers simple sanitation and boasts long run times between defrost, preventing downtime during the peak harvest season. In fact, the line ran for 22 hours between defrosts on wet, sloppy blackberries. Plus, the OctoFrostis designed to lower consumption of power, electricity and water, resulting in less dehydration loss through the freezing process.

“Being able to remove the front bedplates and exchange for clean ones once the airflow holes get plugged with juice is just brilliant,” says Dunn. “Later on in the season during blueberry production, we were able to achieve up to 48 hours of run time between shutdowns for defrost. The coil blower that keeps the snow buildup off the coil is a huge advantage, and it also doubles as a coil defroster during defrost mode, which speeds up the defrost cycle considerably. And, right away, we noticed better finished product yields over our older freeze tunnel due to less dehydration loss.”

Easy installation makes for continued operations
Once the equipment was in place, the OctoFrost team sent a technician to the plant to inspect installation and help with startup procedures.

“Our interactions with the OctoFrost team were very good, and their explanations of how the system worked were very detailed,” adds Dunn. “The ordering process was simple, and they shipped the unit to us on time and it arrived when they said it would. This was very important, as we had limited time to get the new system online and running before the coming berry season. An added surprise was the ease of unloading, rolling the unit in place and making the refrigeration, electrical, air and water connections. The OctoFrost team sent us very helpful and detailed manuals.”

Since then, Inventure Foods has installed three OctoFrost freeze tunnels, two being in its fruit processing plants.