Robots have just the right touch

For people who grew up in the Philadelphia area in the last 50 years, Dietz & Watson is practically a household name. In fact, it’s not uncommon to hear people ask for Dietz & Watson (D&W), whether they’re purchasing lunch meat at the grocery store or having a hoagie custom made at their local deli. 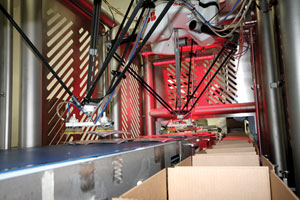 D&W started as a family business in 1939, and moved to its present location in Philadelphia at 5701 Tacony Street in 1975. Last year, its warehouse, which was located in New Jersey just across the Delaware River, burned to the ground. The company then purchased additional land next to its Philadelphia location for more than enough cold-storage space—plus a few new production lines to keep up with demand for its products, including artisan cheeses and condiments. The company also owns plants in New York and Maryland.

With all the growth the company has enjoyed, any improvements in production speed are appreciated, and according to Chris Eni, D&W chief operations officer, one area worth investigating was the cartoning of vacuum sealed pouches of sliced meats. Eni contacted Craig Souser, president and CEO of JLS Automation, with whom he has worked for several years in applying automation applications at the facility.

With two side-by-side packaging and case-packing lines, Eni thought converting the manual case-packing stage on one of them to robotics might be a good place to start. Prior to the case-packing operation, deli logs about four-ft. long and five in. in diameter are automatically sliced, then vacuum-packed in poly bags that can be opened and closed by the consumer. “On the manual line with six or seven people, we typically carton nine to 10 cases per minute,” says Eni. However, he thought automation could improve the process.

The unique aspect of this robotic cell is the robot’s sense of touch, according to Schoenfellinger. When it senses a leaky package , instead of cartoning it, the robot puts it in the reject line, especially important for a hot dog line, where packages have juice in them.

Simplifying product changeovers also has made the case-packer cell an excellent addition to the line, says Schoenfellinger. All that’s required is an entry on the HMI and, sometimes, a mechanical adjustment to one rail, and the cartoning system is ready to start on the next project. “On the robotic line, we average 14.5 cartons [machine cycles] per minute with two operators, one as an inspector and one who loads the finished cartons onto the pallet,” says Eni.

While the Osprey’s vision system currently scans for the presence of labels and barcodes, there’s the possibility of using the barcode information for track and trace applications or simply to make sure the right label is on the package, says Eni.