Better For You Foods, Delray Beach, Fla., launched what is said to be the first line of gluten-free pizza made with sprouted ancient grains. 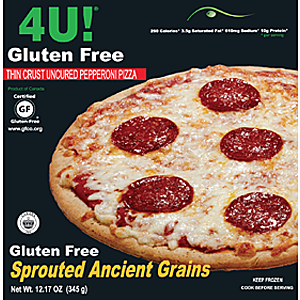 Sold under the Better4U brand, this line of frozen pizzas are made with four sprouted gluten-free grains—quinoa, flax, millet and chia—and are higher in fiber, vitamins and minerals than traditional grains.

"Last year Better4U Foods introduced frozen sprouted grain pizzas with 39 grams of whole grains per serving, and we received rave reviews from consumers and retailers alike," says Jack Lotker, founder and CEO. "We knew then that we had to develop a gluten-free line of pizzas with sprouted grains for our loyal customers who deserve a better variety of healthy gluten-free products."

They come in Four Cheese, Uncured Pepperoni and Mediterranean varieties.