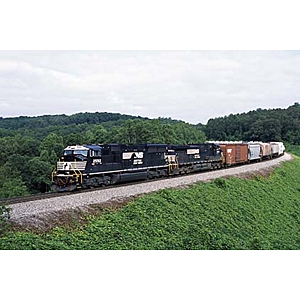 “Our capital plan will maintain the safety and quality of our existing franchise, improve service quality and performance, achieve operational efficiencies and productivity improvements, and support business growth,” says Wick Moorman, chief executive officer. “We continue to invest in the infrastructure, equipment and technology necessary to provide the best possible service to our customers.”

The largest expenditure will be $831 million for roadway improvements, including the maintenance and replacement of rail, crossties, ballast and bridges to ensure the continued safety and reliable operation of the railroad. Equipment spending includes $420 million to acquire new locomotives and rebuild and upgrade existing units; re-body coal cars; buy multi-level freight cars to handle increased automotive traffic; and purchase intermodal containers and chassis.

Norfolk Southern also budgeted $229 million, about 11% of the 2013 budget, for the continued implementation of positive train control. Investments in facilities and terminals are anticipated to be $203 million and include the continuation of a multi-year project to expand Bellevue rail yard in Northern Ohio; construction of a new intermodal terminal in Charlotte, N.C., as part of Norfolk Southern’s Crescent Corridor initiative; completion of a new locomotive service facility in Conway, Pa.; and new and expanded bulk transfer facilities.

Norfolk Southern also expects to spend $84 million in infrastructure improvements to increase main line capacity, accommodate traffic growth and provide a match for innovative public-private partnership investments such as CREATE in Chicago and the Crescent Corridor, which will improve the nation’s transportation infrastructure, reduce fuel consumption and air pollution, and relieve highway congestion by moving freight off highways onto rail.

Plus, technology investments of $57 million are planned for new and upgraded systems and computers to enhance safety and improve operating efficiency and equipment utilization.