Founded almost a half-century ago as the Condon Supply Co., Arctic Cold Storage, St. Cloud, Minn., has grown into one of the Upper Midwest’s leading food 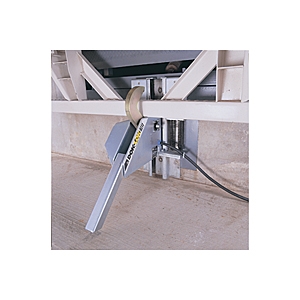 distribution 3PLs. The company’s160,000-square-foot warehouse now handles between 100-125 truckloads per day, picking and prepping shipments of 8-9 million pounds of frozen food per week for big box retailers like Wal-Mart and Target.

Despite its size, Arctic Cold Storage remains a family-owned business. The service- and employee-orientated vision established by founders Robert and Elizabeth Condon is now carried on by their grandson Jay Condon, the company’s chief operating executive.

Safety first
One example of this employee-oriented approach can be seen in recent renovations to one of Arctic’s most crucial work areas—its loading docks. For years, tractor trailers backing into Arctic Cold Storage’s docks were secured manually using wheel chocks and Glad-Hand locks, with a yard person notifying dock personnel via two-way radio when the trailer was secure and ready for forklifts to enter. While this system worked, an OSHA inspector pointed out some potential problems—beginning with its potential for mishaps based on human error.

“We have always viewed our employees as our most important asset,” says Robert Condon. “Even though we’ve never had issues with trailer security, we felt strongly it was time to up the safety level, and put in an automatic trailer restraint and communications system.”

The solution
Condon reached out to dock design consultants Pugleasa Co., Arden Hills, Minn. After reviewing a range of options, Arctic Cold Storage installed Milwaukee, Wis.-based Rite-Hite’s RHR-600 Dok-Lok system on 19 of the company’s 24 docks. Designed to prevent all types of trailer/dock separation accidents—including trailer creep and tip-over, as well as early departure—the Rite-Hite rotating hook restraint is said to be the industry’s original and continually improving vehicle restraint. Using the energy of the backing trailer, it positions automatically. Powerful extension springs provide upward force against the rear impact guard (RIG) to keep trailers secure, including air-ride suspension trailers. The system’s universal controls feature an audible alarm with override and easy interconnecting functions. Perhaps best of all, the exclusive system provides full time communication to truck drivers outside and to dock personnel inside when entering and exiting the trailer. Particularly important to Arctic Cold Storage was the system’s two-fold approach to communication with lift truck drivers. Since products are often staged in front of the dock doors, it can be difficult for lift truck drivers or other personnel to see the restraint status on the control boxes, thus increasing risk and slowing productivity. Corner-Vu, part of the Rite-Vu Light Communication System, features lights on the upper corners of the interior dock doors, providing clear, concise Dok-Lok status information directly in the forklift driver’s view.

“We can now focus our outdoor personnel on yard security as opposed to trailer security,” says Condon. “The addition of the new restraint/communications system frees up as much as half of an employee’s time per day to be used elsewhere, saving us in the range of $20,000 per year.”

Arctic Cold Storage also received good news from its insurance provider since making the safety upgrade. In fact, its insurance-related costs are estimated to go down by as much as 15% this year.