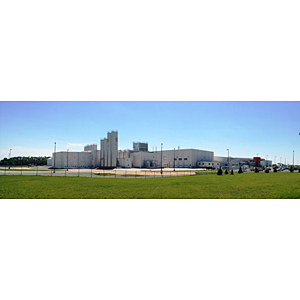 million plant is the largest industrial capital expenditure in Bel Group’s history. Construction of the 170,000-square-foot facility, which sits on a 48-acre site, began in July 2012 and applies state-of-the-art and proprietary manufacturing processes developed in Bel Brand’s Evron, France, facility. The company has already hired 215 new employees and is expected to have 250 hourly and salaried employees on staff by year-end.

“Our Mini Babybel volumes have practically tripled over the past five years. Last year, sales of Mini Babybel increased by 24%,” says Frederic Nalis, chief executive officer of Bel Americas and president and CEO of Bel Brands USA. “Today, Mini Babybel represents a third of our volumes. We invested $144 million to build the new plant, which has a production capacity of more than 22 million pounds, or approximately 1.5 million Mini Babybel portions every day.”

Mini Babybel is a rich, creamy portable cheese that is 100% natural and individually wrapped in its signature red wax and cellophane.

"The inauguration of our third plant in the United States is a historic event for the group," says Antoine Fiévet, Bel Group's chairman and CEO. "It incarnates our willingness to dare, which is one of our company values. We introduced Mini Babybel to the United States in 1979. Since then, the brand has established itself as a healthy and fun snack to be eaten on the go—making it particularly well suited to American eating habits. This new production site, which represents the largest industrial capital expenditure in our company's history, is fully in line with our growth potential on the American continent."

The Mini Babybel Brookings plant will use about 500,000 pounds of milk per day, which is being purchased through two dairy co-ops in the region—Dairy Farmers of America and Land O’Lakes.