Can the design of a building represent a management style? In the case of a new cheese plant in South Dakota, the answer is yes. The glass windows in the administration offices, the employee lunchroom and even the entrance all contribute to transparency and sharing, which are values held dear by management of Bel Brands USA’s newly opened cheese plant in Brookings, S.D., which produces Mini Babybel cheeses. 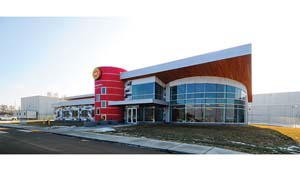 All 270 employees enter through the front of the building; there is no separate entrance in the rear of the building for production staff. A sunlit lunchroom is to the right of the foyer. The glass-walled room is stocked with fresh and packaged foods for purchase. The round, porthole-style windows evoke the shape of the Mini Babybel cheeses themselves.

After they pass through a turnstile, employees punch a time clock. On the way to the locker room they see a bulletin board plastered with production statistics and notices from Vice President of Operations and Plant Manager Cyril Cledelin. The statistics show what each department has accomplished and what needs to be done.

For Cledelin, a Frenchman who relocated his family to South Dakota, setting and communicating expectations and sharing information about successes (and failures) is the best way to ensure that the company stays on track. Cledelin follows the 5S lean manufacturing style of managing popularized in Japan. Translated from Japanese, the five S’s mean tidiness, orderliness, cleanliness, standardization and discipline. Bel Brands refers to these as Sort, Simplify (or Set in Place), Systematic Cleaning, Standardize and Sustain.

The 170,000-square-foot facility on 48 acres in Brookings has the capacity of producing more than 22 million pounds of cheese annually. That is approximately 1.5 million Mini Babybel portions every day. It makes Original (a Gouda type cheese), Light and Mozzarella. They are currently doing trials for Gouda and eventually white Cheddar will be produced here (now it is imported from France). Costing $144 million, the plant is the largest industrial capital expenditure in the history of Bel’s parent company, Paris-based Fromageries Bel (Bel Group).

Bel Group Chairman and CEO Antoine Fiévet called the opening of the plant “a historic event” for the company. “It incarnates our willingness to dare, which is one of our company values,” he said.

Construction began in July 2012 and in October 2014 Bel Brands cut the ribbon to mark the official opening of the plant. While Bel used local contractors and building materials, it did relocate French engineers and their families to South Dakota for the two years the plant was under construction. By December 2014, all but one engineer and Cledelin and his family had returned to France. Last October’s ribbon cutting drew VIPs from France and South Dakota, including Fiévet, South Dakota Gov. Dennis Daugaard, U.S. Sen. John Thune and U. S. Congresswoman Kristi Noem. Also in attendance were members of the Governor’s cabinet and Brookings Mayor Tim Reed. Representing the French Embassy in the United States were Vincent Floreani (the French General Consul for the Midwest) and Christophe Malvezin (the Agricultural Counselor, Economic, Trade and Treasury Department).

Even though consumers of the cheeses are concentrated on the East and West Coasts, Bel located the plant in South Dakota because of the ready milk supply and because of South Dakota State University, said Bel Brands USA President Frederic Nalis. The university provides technical expertise and research capabilities, not to mention a well-educated workforce. About 30% of the salaried employees are graduates of SDSU.

The Brookings plant uses state-of-the-art and proprietary manufacturing processes developed in Bel’s Evron, France facility. The South Dakota facility measures 350 meters long (382 yards, or about the length of four football fields). Milk is received at one end and exits as cheese at the other. A long, wide corridor (large enough to accommodate a truck) runs parallel to the production floor. Each room of the manufacturing area has large viewing windows and is named by function. This helps during tours for customers and other visitors. They can observe the cheesemaking or packaging process without having to suit up in protective gear to enter the room.

When running at full capacity, Bel Brands expects to use about 500,000 pounds of milk every day. Local members of the Dairy Farmers of America and Land O’Lakes cooperatives deliver milk throughout the day. The plant has two receiving bays and a third bay where it ships out condensed whey, a byproduct of cheesemaking.

When a milk tanker arrives, samples of raw milk are sent to the on-site lab. Technicians test for total solids, somatic cells, bacteria and other characteristics. The milk laboratory is approved by the federal Food and Drug Administration and is listed on the current Interstate Milk Shippers list. If the load is accepted, the milk is pumped into one of five silos. The plant uses a scale and a flow meter to verify the volume. In the receiving area is a 40,000-gallon milk silo, two 20,000-gallon silos for sweet cream and two 6,000-gallon silos for whey cream. Bel runs the milk through a separator so that it can later adjust for the proper fat-to-protein ratios.

After the milk is processed, it flows from the receiving area to the curd/molding room where there are six stainless steel vats. The cheesemaker adds starter and rennet to the milk. In a conventional cheese facility, the curds would be pumped into forms to make 40-pound (or larger) blocks or wheels. In this plant, however, the cheeses are much smaller; just three-quarters of an ounce (20 grams). An integrated molding machine developed by Bel has trays containing 80 molds each. Curds are pumped into the molds, a top is added and then pressure is applied gradually to remove the whey.

From vats to molding is a 90-minute process. Following this step come acidification and brining. After ripening in a refrigerated room for 18 hours, the molds are placed on a carousel and the cheeses tumble out onto a conveyor.

Next, the cheeses move by conveyer to the waxing room with five lines. The waxing equipment was developed by Bel in France, and its design is a closely guarded company secret. The little cheeses receive two coats of wax that is FDA-approved for food use (but Bel does not recommend eating it). First the cheese is dipped into clear wax, blotted and then dipped into red wax. The 2-gram coating of clear wax prevents the red wax from bleeding into the cheese. One waxer can coat 21,000 pieces per hour.

A cold-water wash hardens the wax and then each piece of cheese passes through a metal detector and through a machine that checks for conformity to a standard. Misshapen and ill-formed cheeses are rejected. These will be sent to Bel’s plant in Kentucky to be used in Laughing Cow processed cheese.

Now the Mini Babybels are ready to be wrapped in cellophane and labeled. The packaging machines are capable of wrapping 400 cheeses a minute. Then the cheeses move to the bagging station. A machine forms the signature mesh bags from a spool of netting material. The netting is cut and sealed, a label is attached, a printer adds codes and a sell-by date, and the bags are hand-packed into cardboard cases. Four carton formers in the area produce a steady supply of cases.

Before the bags reach the case packing station, an inspection system will have rejected packages with the incorrect number of pieces. The day that Dairy Foods visited, the machine was forming bags containing six cheeses. Bel Brands can pack six, 10, 12, 14, 26 and 32 pieces to a bag. The quantity depends upon the customer. Club stores typically order the larger bags for consumers who like to buy in bulk.

Associates take the corrugated cases and build pallets by hand. A pallet contains 165 cartons. These are conveyed to the cold storage room. Forklift operators put pallets on racks. The racks move on rails for easy accessibility.

In the QA lab

The plant has two on-site labs. One tests finished products for quality assurance, and the other tests raw milk for coliform and bacteria. Samples are sent to an outside lab for Listeria testing.

In the QA lab, technicians are testing cheese samples for moisture content, pH levels, salt and other quality standards, like milk protein and fat. They look at the labeling and wrapping. Samples come from the production line and from the sensory room. (Every three days the Original, Light and Mozzarella cheeses undergo organoleptic testing in the sensory room.) In the chemical lab, the techs run microbiology tests such as E.coli, coliform and general bacteria. The federal Food and Drug Administration and the South Dakota Department of Agriculture have jurisdiction over the plant.

A CIP room is located opposite the milk receiving area. It has four silos containing caustic, acid, fresh water and reused water. Waste water is cleaned before being released to the city sewer system. The plant also collects cardboard, plastic and wood for recycling.

Bel Brands has applied to the U.S. Green Building Council for LEED certification of the administration building that is attached to the front of the plant. The owner’s representative for the plant was Faithful+Gould, Minneapolis. Miron Construction, Neenah, Wis., was the general contractor and Mead & Hunt, Minneapolis, did the mechanical, engineering and plumbing design.

Bel Brands expects the plant to stay busy for a long time to come. Since 2009, sales of Mini Babybel have nearly tripled, said CEO Nalis. In 2013, sales increased 24% and in 2014 they grew 11%. Nalis said the Brookings plant was built to serve the U.S. market, but cheese from here could be exported to Mexico, South America and eventually Canada, pending a trade agreement.

The trends are in Bel Brands’ favor. “This is the largest snacking market in the world and this is why this product is working great here in the U.S.,” Nalis said. “Even though our brand maturity is relatively modest compared to other markets around the world, the U.S. is already the largest Mini Babybel market for Bel around the world.”