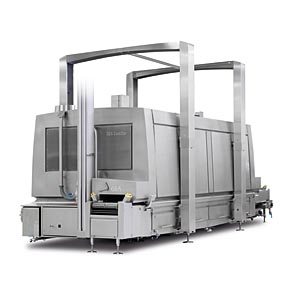 operation in Lai’an, China in just nine months—eight weeks ahead of schedule.

On Sept. 2, Cargill delivered its first shipment of chicken nuggets from one of the lines to McDonald’s China, helping satisfy a sudden and unexpected increase in demand from the quick-service restaurant chain. The first line processes chicken nuggets at a rate of 30 tons per day while the second line processes boneless and bone-in poultry products.

“This operation is strategically important to Cargill in China, meaning the timing is critical. So, when an opportunity arose to start supplying McDonald’s earlier than originally planned, we appreciated GEA’s commitment and ability to move things forward by eight weeks,” says Christopher Langholz, president of Cargill Animal Protein China.

A collaborative effort
The lines represent a $12.6 million order for GEA Food Solutions, who worked closely with GEA Refrigeration Technology for the deepfreeze and cooling part of the project (worth an additional $8.8 million). To realize the two lines in such a short time also meant working closely with partners like logistics and rigging specialists Convoy, Eindhoven, the Netherlands, and integrated packaging solutions provider Hellings Machinebouw, Sint Oedenrode, the Netherlands, who handled the transport belt automation around the GEA SmartPacker vertical packaging machines.

“Unusually for a project of this size, the customer also asked us to organize and oversee lifting the equipment into place (rigging) and to install utilities. This involved using local contractors, who were carefully selected with the help of our Chinese sales and customer support personnel. Local GEA people were also vital for overcoming language issues,” says Christian van Grinsven, project leader.

Strengthening a long-standing relationship
“China is an important region for both GEA and Cargill, and the success of this project has strengthened the long-standing relationship between our two companies,” says Mikhail Volynkin, project manager for GEA Food Solutions. “GEA Food Solutions has built up experience in many different countries already. By using the experience gained in Europe, Russia and similar projects in Thailand, we were able to shave eight weeks off the original deadline.”

Cargill officially inaugurated its world-class vertically integrated poultry operation in China in September 2013. The project covers each stage of the poultry supply chain, including chicken breeding, raising, feed production, hatching, slaughtering and processing. The facility has the capacity to process approximately 65 million chickens per year, as well as 176,000 metric tons of poultry products per year and is part of Cargill’s support for the modernization of agriculture and food safety in China.

The full scope of GEA Food Solutions’ equipment
Discussions with GEA for the processing lines started in late 2012, and on-site installation commenced in January. Nine months later, the first kilogram of nuggets was produced, and the line is now capable of running at an even higher capacity than originally specified. The project covers the full scope of GEA Food Solutions’ equipment, including preparation, marination, processing, freezing and packaging machines. Line one features partial frying (par fry) for nugget production, while line two has a GEA spiral oven for various fully cooked poultry parts.