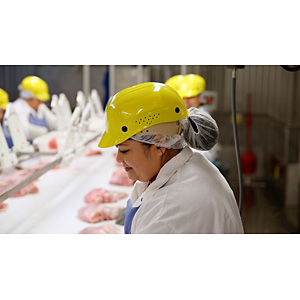 months. The fire started in the dark meat room.

“Thankfully, there were no injuries in the fire, but damage to the plant was extensive and portions required major renovations before it could safely operate,” says Ray Team, who oversees the Storm Lake turkey operation. “Storm Lake first responders did a great job helping us the day of the fire, and we’re grateful for their efforts. We also received an outpouring of support and offers of help from others in the community.”

The turkey plant became part of Tyson Foods in late August when it acquired The Hillshire Brands Co. Tyson Foods also owns and operates a pork plant in Storm Lake.

“Tyson Fresh Meats has been a part of the community for a long time,” says Noel White, president of poultry for Tyson Foods. “We’re glad to have more people from Storm Lake on the Tyson Foods team.”

All Storm Lake employees continued to be paid and received medical benefits as the plant was being rebuilt. Many employees were involved in cleanup and rebuilding efforts. In September, Tyson Foods launched an exercise program in conjunction with local healthcare organizations to ensure employees would be physically ready to return to work.

After more than six months of rebuilding, the plant is now partially open for business. Currently, the turkey plant’s white meat turkey processing area is up and running. The dark meat operations are expected to resume in January 2015.