Devanco’s frozen and refrigerated products – including beef bacon and hummus in the refrigerated category – are sold in over 20 countries worldwide.

There’s little doubt that scores of hungry fans in Qatar for the 2022 World Cup dined on a Devanco Foods product: the Chicago-based company shipped more than a half million pounds of halal beef bacon and deli meats into the country ahead of the tournament.

Nearly 150 employees make over 25 million pounds of food annually at the company’s 105,000-square-foot manufacturing facility. Devanco’s frozen and refrigerated products – including beef bacon and hummus in the refrigerated category – are sold in over 20 countries worldwide.

“This award is a fantastic representation of all the hard work our employees put in this year,” said Peter Bartzis CEO of Devanco Foods. “2020 and 2021 were challenging years for everyone, us included. As we strive to put those years in the rearview mirror, we remind ourselves that persistence is key to success. It is nice to be recognized for our persistence and innovation.”

Devanco transitioned a few years ago to a 100% halal facility. With a proven business in the frozen foods segment, over the last several years the company also has invested in its refrigerated line.

“Refrigerated is growing category for us. I’d say we probably offer 100 SKUs, with plans to expand on that in the coming years,” Bartzis said. “We have two really strong items in the Beef Bacon category that are quickly moving their way to the top of our sales reports. Devanco’s label of beef bacon is now in over 2,000 stores across the United States including Walmart, Albertsons and Kroger. Schmacon, a Certified Angus Beef Bacon label, is also available in a number of stores across the country. It is incredible to be partnered with a brand such a Certified Angus Beef. They carry such a brilliant reputation and have truly been an asset to us in the beef bacon business. We plan on growing our Certified Angus brand with a number of items rolling out in 2024.” 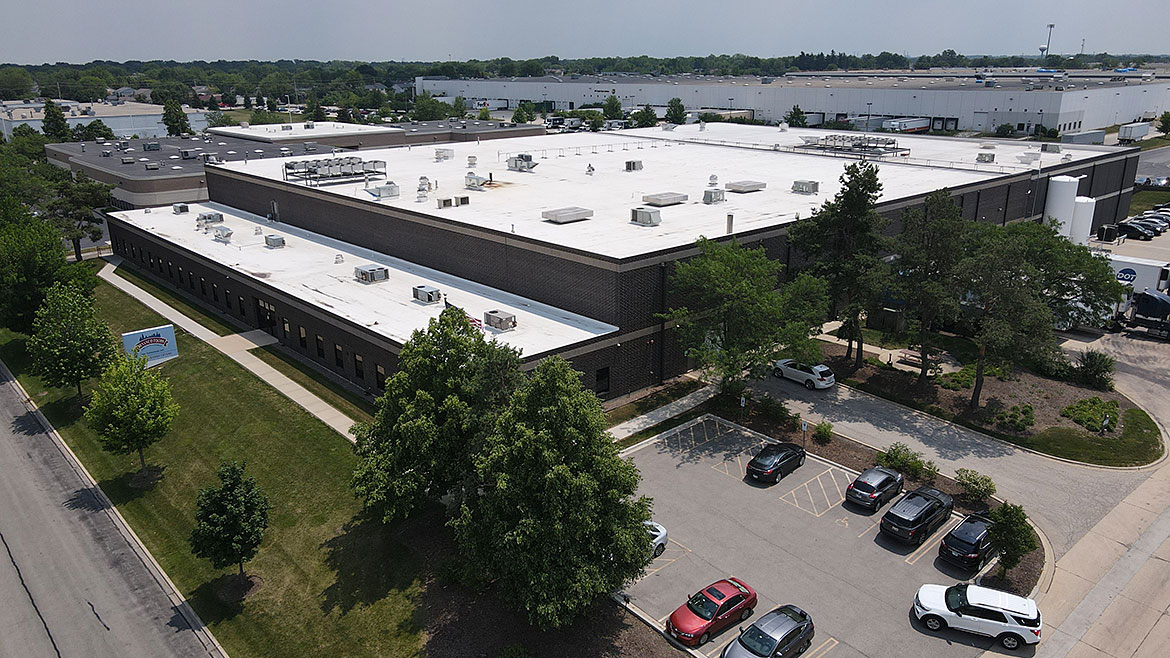 Islamic dietary law mandates that meat, poultry, and seafood be halal, meaning that they meet certain religious requirements concerning the way they were slaughtered and produced. The global halal foods market is expected to hit a double-digit CAGR by 2028.

“We recognized that the halal category was a rapidly growing category of consumers,” said Parker King, national sales manager. “We took all of the pork products out and made a serious commitment to that halal category.”

Devanco Foods produced over 1 million pounds of beef bacon in 2022 and provided halal products to hotels, restaurants, businesses and healthcare facilities throughout the Middle East. In the U.S., the company is launching in university and health facilities that need halal-certified foods.

In addition to being halal, it is lower in sodium and fat than traditional pork bacon. Devanco Foods holds two patents for its beef bacon production process and proudly makes "Americas Steak Bacon,” King said.

LISTEN: Devanco Foods on From the Cold Corner

It first launched in the Middle East and came home to the U.S. and Canada during the COVID pandemic.

“Usually, items start in foodservice and then go into retail; due to the pandemic, we launched the opposite. Our branded halal bacon will be in over 2,500 grocery stores by year-end. We will be launching coast-to-coast in the spring with one of the largest foodservice distributors in the world too,” King said.

In 2018, the company partnered with Zacca Hummus, an Idaho-based company founded by Janine Zacca Zenner, using the garbanzo beans grown on her husband’s fourth-generation family farm.

A little over a decade ago, Zenner’s Lebanese mother was mortified when she saw her daughter using canned beans to make her hummus instead the fresh garbanzos she knew Zenner had access to. A mom working as an accountant, Zenner established her hummus brand first at farmer’s markets and then at locations around the northwestern U.S. until she met Bartzis in 2018. 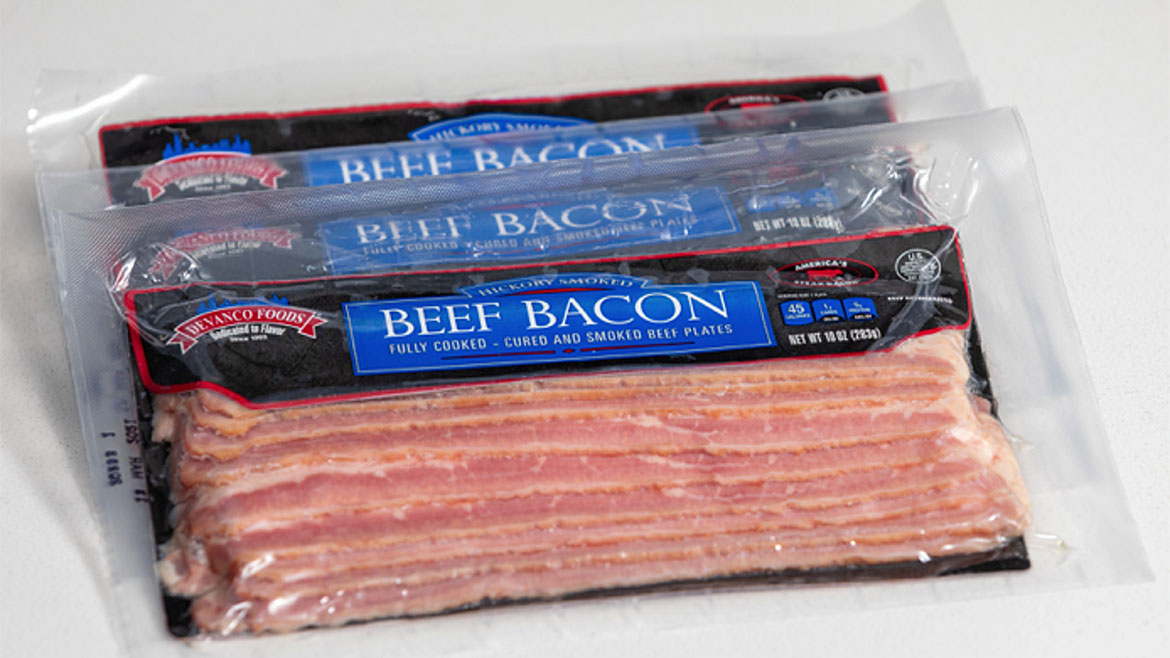 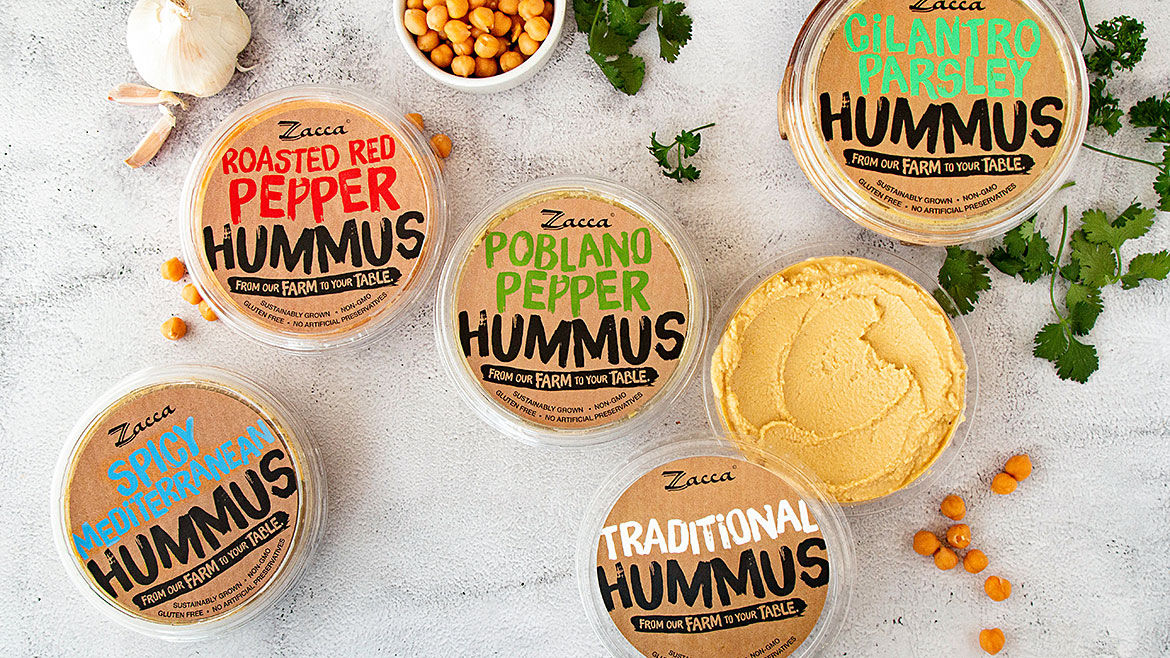 Devanco’s bacon and halal products are sold in over 20 countries around the world. Courtesy Devanco Foods.

“With Devanco’s innovation and technology, we have perfected the consistency and improved it with globally-influenced flavors. So, we’ve come a long way with Devanco Foods,” Zenner said. “We can trace our beans directly back to our fields and then it’s shipped directly to Devanco, our manufacturer. That vertical integration from the farm to the table is really unique for what it does for our brand.”

Zacca Hummus last year was chosen as a Kroger Accelerator, winning a top five spot out of 1,600 applicants in a “Shark Tank” style pitch session. The brand joined Kroger’s Fresh suppliers, resulting in distribution to 400 additional stores and other benefits like in-store promotional support and mentorship.

“It was quite fascinating and only the second year that they’ve done it,” Zenner said. “We’re preparing to launch in January (in those additional stores).” 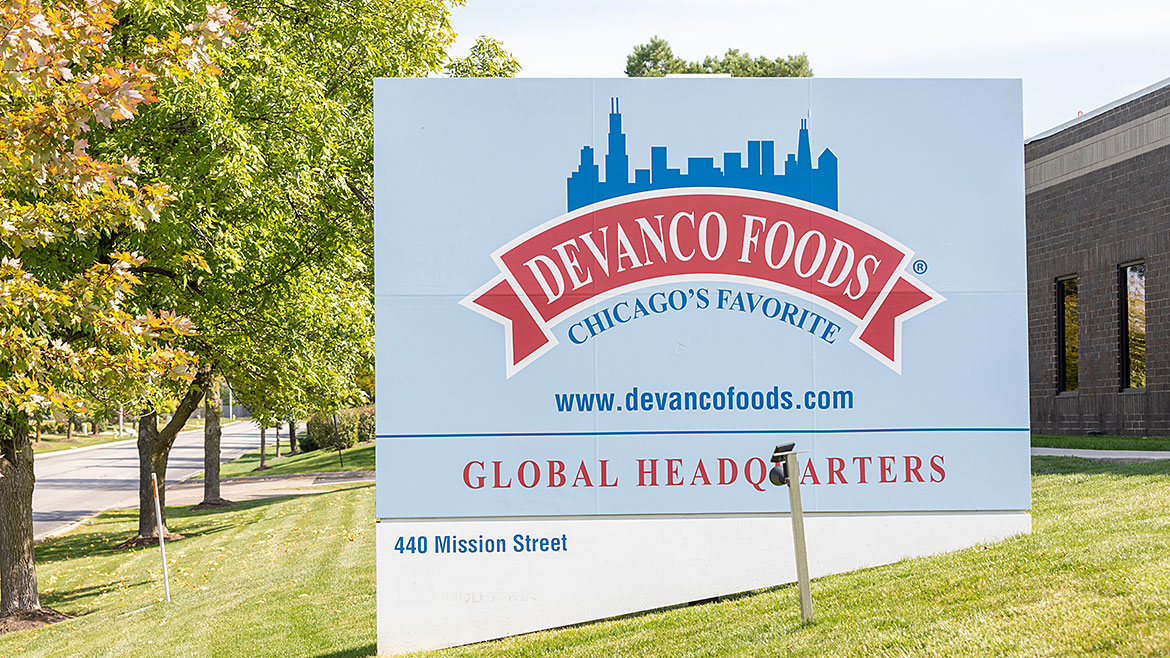 “We are doing a capital expenditure in Q2 of 2023, in order to automate our hummus production lines, which will increase our capabilities for that specific brand,” Bartzis said. “Energy remains to be a focus for us. We have a partnership with the state of Illinois and ComEd Energy, where we reduce our facilities’ power to net zero for a scheduled time period in the summer. An Interesting opportunity we are exploring is exporting the excess grease we collect from food processing every year to a company that converts that grease into usable jet fuel.”

A privately-traded company, Devanco Foods recorded $100 million in sales in 2022 across all brands, experienced 20% growth in sales twice in the last two years, Bartzis said.

“We have plans on growing to $200 million within the next five years. Refrigerated items are a big part of that and will continue to play a major role in the growth of the company,” he said.

A volatile market is tough for any company to navigate. We are challenged daily with rising cost of goods, labor, energy and freight. Our team does a great job at rolling with the punches in order to get quality products out the door at a fair price,” Bartzis said. “We have always said that our dedication to flavor sets us apart, it is actually in our logo. As a team, there is a serious dedication to what our products taste like. We want to put the very best on your table (or sandwich).”