This website requires certain cookies to work and uses other cookies to help you have the best experience. By visiting this website, certain cookies have already been set, which you may delete and block. By closing this message or continuing to use our site, you agree to the use of cookies. Visit our updated privacy and cookie policy to learn more.
Home » 2020 Frozen Foods Processor of the Year: Devanco Foods
Frozen Foods Processor of the YearFood SafetyPackagingSupply Chain & LogisticsIndustry News

The Chicago-based company pivoted to focus on the freezer aisle in 2020.

In a year when everyone working along the cold chain has had to pivot in some way to keep their business moving forward, Devanco Foods has been maneuvering with success to grow its customer base in retail frozen foods while its core clients in foodservice struggled due to COVID-19 restrictions.

“Prior to 2020 and the pandemic, our business was approximately 85% foodservice and 15% retail. This year, thanks to our magnificent sales team, we were able to pivot and open additional retail avenues as restaurants across the country were forced to close. Because of this, our retail business has grown to 25% and our foodservice sales team has done an excellent job in continuing to grow sales despite the pandemic,” says Peter Bartzis, president & CEO, Devanco Foods.

While Devanco makes a wide array of cold food products for its own family of brands and numerous private labels—around 500 SKUs total when retail and foodservice are tallied together—it’s the frozen side and its retail success we want to acknowledge by awarding Devanco Foods our 2020 Frozen Foods Processor of the Year.

The company had an indication back in March that 2020 was the year it would make an impact in the freezer aisle when it placed first in Refrigerated & Frozen Foods’ Best New Retail Products Contest with a near-record number of votes (25,573) for its No MSG Gyros Kit. Voting was open to the public, and the product likely struck a chord with then-quarantined families, since the gyros kits are build-your-own and double as a group dinnertime activity.

“The recognition means a lot to us as we continue to grow the retail side of our business,” says Liz Vanderhoef, Devanco’s marketing manager. “The success of our No MSG Gyros Kit tells us families want a quick, easy and healthy meal solution at the end of their days that the whole family can make, and can be customized for individual tastes.” 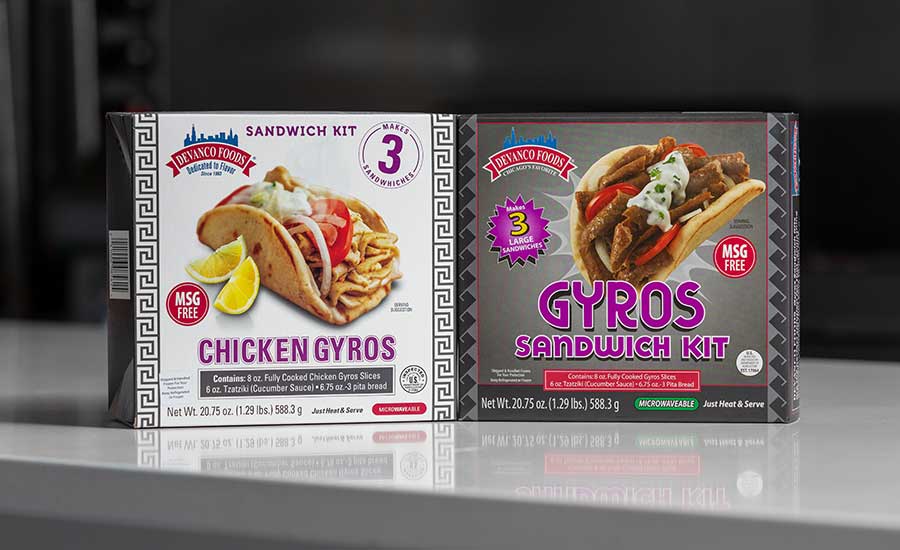 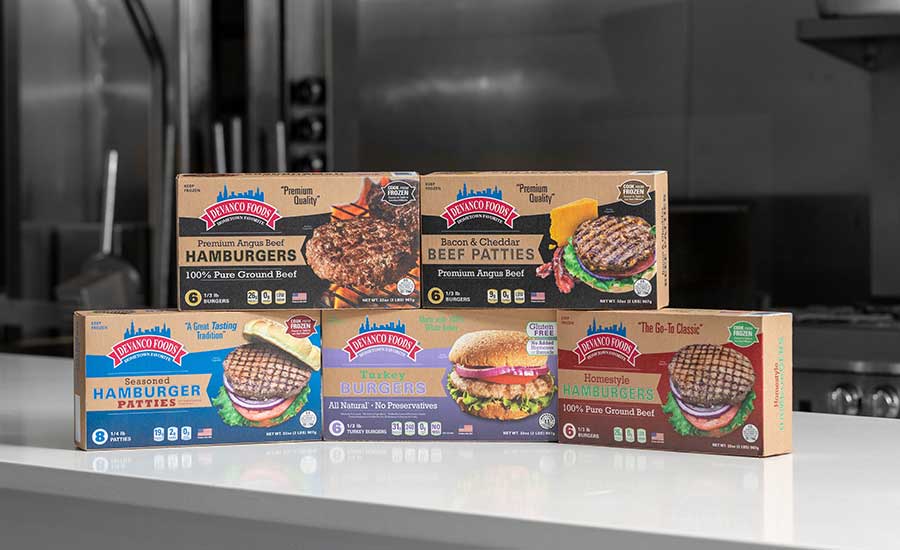 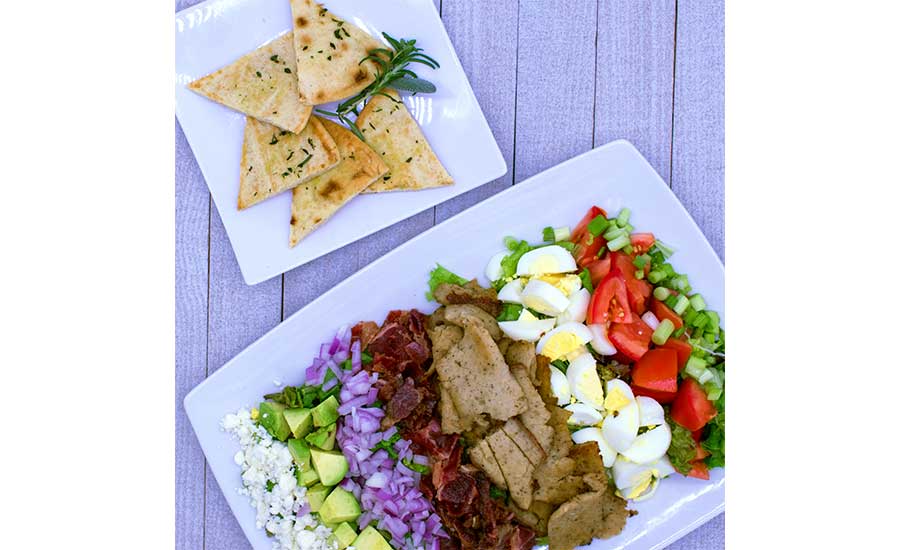 The gyros kits are just one of several frozen retail rollouts for Devanco this year. They also released a line of clean label frozen burgers, including Premium Angus Beef Hamburgers, Bacon & Cheddar Beef Patties, Seasoned Hamburger Patties, Homestyle Hamburgers, and all-natural, all-white meat Turkey Burgers. Devanco is not a novice when it comes to producing burgers—one of their private-label clients is Chicago’s storied Billy Goat Tavern and that brand’s line of frozen patties (otherwise known as a “cheezborger!” made famous on Saturday Night Live in the late 1970s).

Even with the flurry of frozen retail releases in 2020, it’s only fitting that the company’s No MSG Gyros Kit and subsequent R&FF contest win helped to forecast Devanco’s momentum this year, since gyros are one of Devanco’s original flagship products, going back to when the company was founded almost 30 years ago. 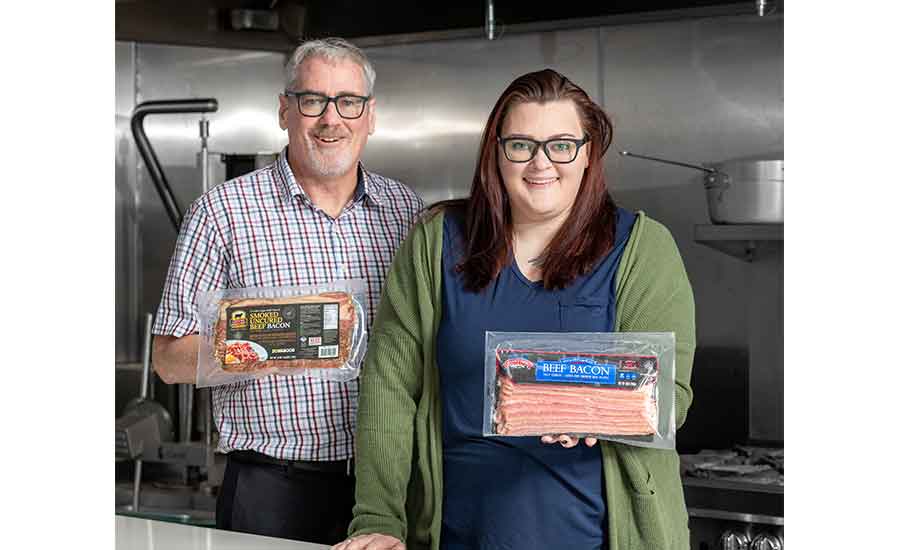 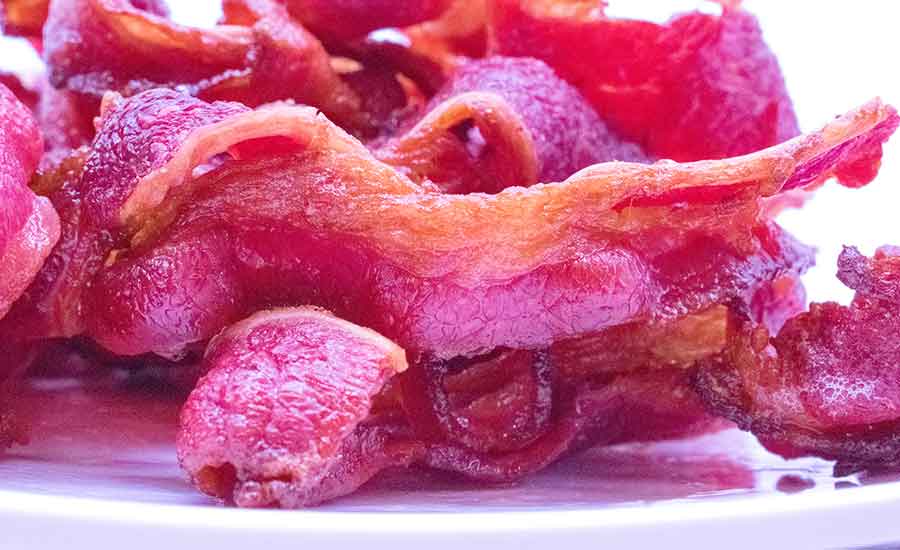 Devanco Foods was started in 1993 by George Apostolou, who named the company by combining his two son’s names—Deno and Avangelo—and also to signify the combination of Greek and Italian foods, since the company’s initial foodservice products were gyros cones for carving and Chicago-style Italian beef. 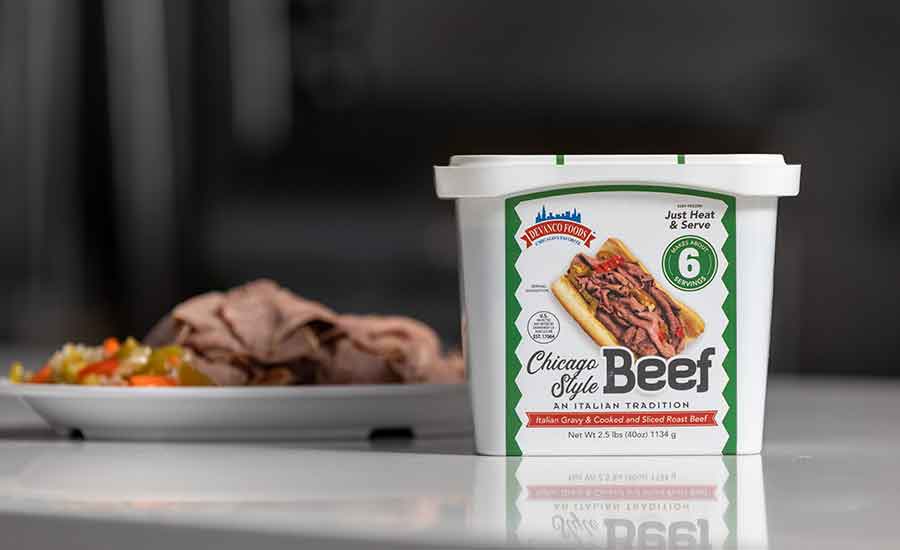 In 2004, Devanco Foods was sold to the current ownership group, BKBG Enterprises-DBA/Devanco Foods, which subsequently created the brand’s Chicago Skyline logo to tie to into Devanco’s Windy City origins. They also grew the company from $3 million to $10 million in sales. Devanco products were originally sold only to foodservice operations across the U.S. and internationally (Canada, the Middle East, Trinidad, and other locations), but in 2010, the company entered the retail market, manufacturing Italian beef and giardiniera for former Chicago Bears Hall of Fame football player and coach Mike Ditka, and his Ditka’s brand. From there, the company continued to grow its presence in the retail market while maintaining its foothold in foodservice. 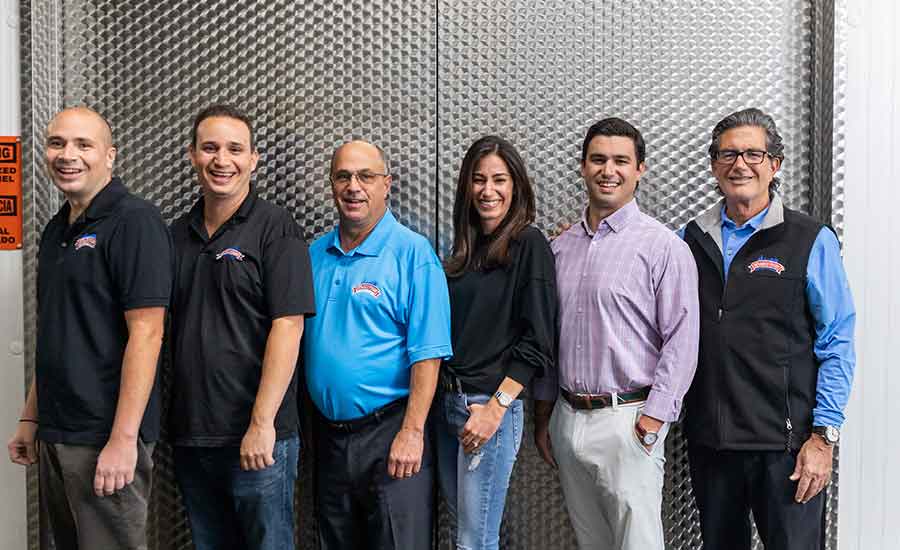 Demand for Devanco’s products grew to the point where they needed a larger, state-of-the-art processing and cold storage facility (see Devanco’s plant feature on P. 16 for more) so in 2018, they moved into a new-build 105,000-square-foot SQF Certified plant, where 20 million pounds of products are produced annually. Also in 2018, Devanco expanded its halal-certified meat production by acquiring the Gridley brand, and in 2019, the company purchased Schmacon beef bacon products, along with its patents and intellectual property. This year, Schmacon Certified Angus Beef Brand Bacon was added to select Costco stores on the East Coast, while Devanco-branded beef bacon is now sold at Walmart in eight states. Overall, Devanco’s ever-growing lineup of retail products can be found in more than 2500 stores nationwide. 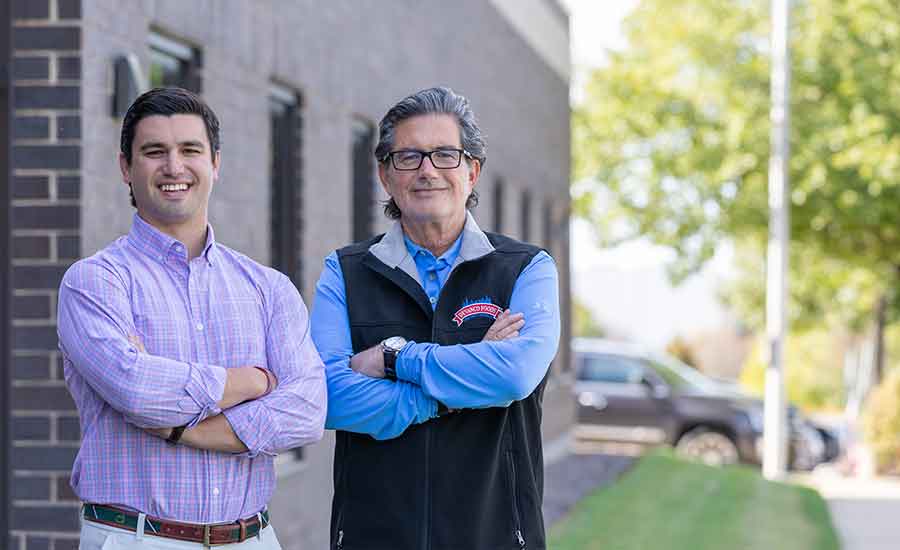 “Prior to 2020 and the pandemic, our business was approximately 85% foodservice and 15% retail. This year, we were able to pivot and open additional retail avenues as restaurants across the country were forced to close. Because of this, our retail business has grown to 25%,” says Peter Bartzis (R), President & CEO of Devanco Foods, with his son Evan (L), Devanco’s GM.

While foodservice is the foundation Devanco was built upon—they currently serve more than 50,000 operations in all 50 states—the company’s recent success in retail has inspired new avenues of innovation and a deeper dive into R&D to discover and deliver what consumers want. 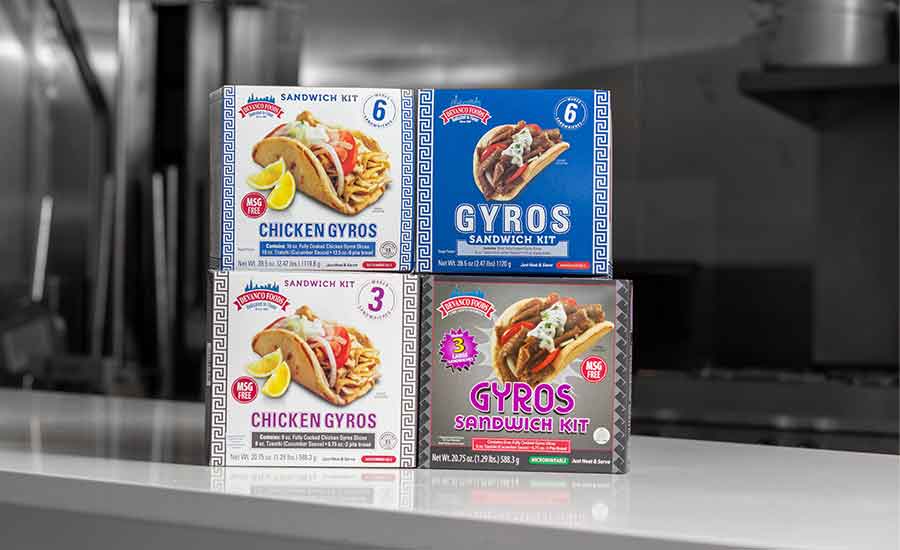 A new wave of Devanco products is being released through the end of 2020 and into 2021, including a line of plant-based items under its new Eleni’s label which will include plant-based versions of gyro slices, Philly steak, falafel, pepperoni, and more; a No MSG Chicken Gyros Kit; a new line of deli meats, including roast beef, corned beef, and pastrami; and Devanco-branded Philly Streak and Chicago-style Certified Angus Beef, to name just a few.

“In the beginning, we would come up with an idea and put it out in the marketplace. But as we grow and continue to innovate, we have a dedicated team that coordinates market research and development, product testing and packaging design. We learned that you can’t rush products to market and that we need to research things properly,” says Evan Bartzis, Devanco’s GM, adding that while the company has had a track record of successful items, there were a few misses along the way, like gyro burgers and Greek sausage. “Those were two that never fulfilled our anticipated sales goals. We learned products have a life cycle, and at the time they were a great idea and sold when introduced, but sales dropped when new products came to market so they were discontinued,” he says. 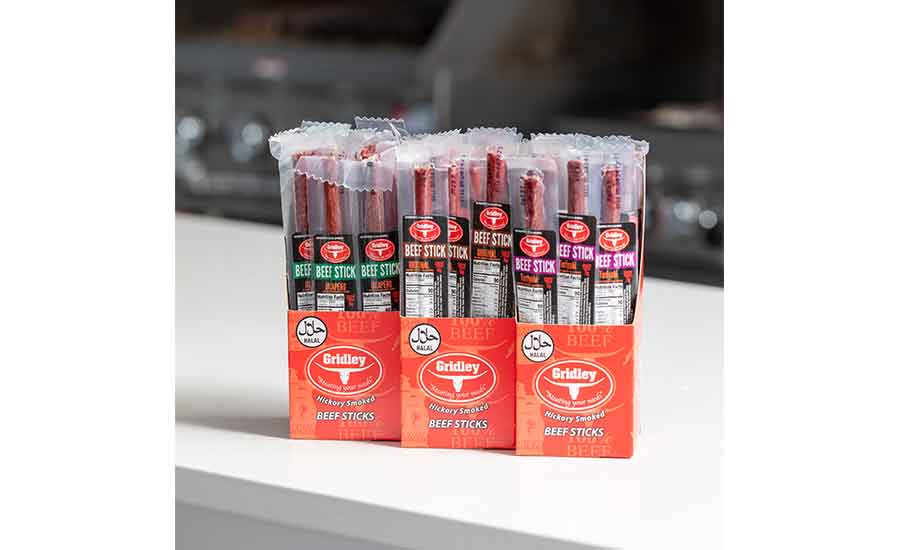 In 2018, Devanco acquired the Gridley brand, which expanded the company’s halal-certified meat production and range of products for retail and foodservice.

Packaging is another area where Devanco has renewed focus, with a goal of all retail products in fully recyclable packages by 2023. The company also continues to update its graphics for more eye-catching colors and designs, the better to stand out in a highly competitive freezer aisle. “We work with our vendors to purchase the most sustainable and least wasteful packaging materials,” Vanderhoef says. Vanderhoef is also in charge of packaging design, and she credits the unique look of their No MSG Gyros Kit as one of the reasons the product caught on with consumers and placed first in this year’s R&FF Best New Retail Products Contest. “With a different color scheme than most meal kits on the market, it really stands out. The gyro meat, pitas and tzatziki sauce are also in one small package that’s easy to store in the freezer,” she says. 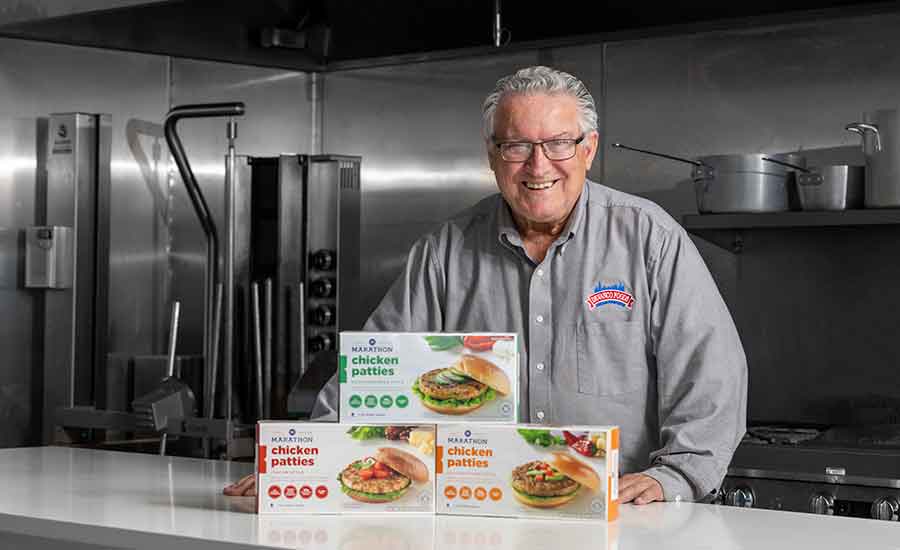 In a pandemic year, Devanco has done much more than manufacture products to meet record demand for frozen foods. “When COVID-19 hit, we wanted to give back those working on the front lines and also the local restaurant owners who are our foodservice customers,” Peter Bartzis says. “So we created the Essential Employees Eats program and partnered with local restaurants to provide meals for a week to Rush University Hospital and multiple Northwestern Medicine locations.”

In addition to contributing to numerous charities over the years, Devanco started the Joseph Peter Bartzis Foundation in 2018 to raise awareness for amyloidosis, which is a rare disease that occurs when a substance called amyloid builds up in a person’s organs. Amyloid is an abnormal protein that is produced in bone marrow and can be deposited in any tissue or organ. Peter and his wife Angie Bartzis lost their son Joey to amyloidosis, so they started the foundation (www.josephpeterbartzisfoundation.org) to help fund research for a cure and to encourage young adults to receive annual physicals and blood tests.

Because Devanco Foods is privately owned, the company declined to disclose current sales figures, but say they’re seeing double-digit growth annually. While they’ve historically made their mark with meat, those at the company say they’re excited about the possibilities for their new plant-based line of frozen foods under their Eleni’s brand for both retail and foodservice, and are keeping an eye on current trends and how COVID-19 has transformed them.

“We’re constantly developing products with great taste and cleaner labels, and we’ll continue to capitalize on that trend,” Peter Bartzis says. “Also, foodservice has evolved and expanded this year into drive-thru and pick-up for convenience, so we’re working to help support this, and we’re also exploring a direct-to-consumer option for our products. We’ll continue to grow our company while maintaining our family-first culture. If you call our office and need assistance, you get us! We’re a family-oriented team that considers our customers a part of that family. Not many other companies can say that.”