Rapid Chilling of Foods… Without Refrigeration

By using more advanced cooking and chilling technology, you can ensure that your potato salad is fresh and offers optimum shelf life without the use of unappealing preservatives. 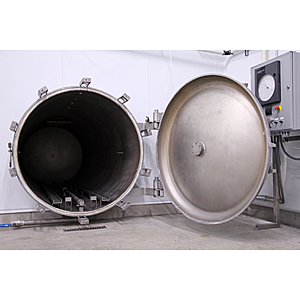 If you’re in the business of making potato salad, you probably realize that the only practical way to satisfy regional distribution requirements is to make a whole lot of product—literally thousands of pounds per hour.

Another critical factor you should know—only by using more advanced cooking and chilling technology can you ensure the your potato salad is fresh and delicious and offers optimum shelf life without the use of unappealing preservatives.

Among the more sophisticated cooking systems ideal for potato salad is the vacuum-sealed retort, a vessel used to cook diced potatoes within half an hour, and then chill the product to 35°F within just 17 minutes, through an evaporative cooling system that uses no refrigeration.

Illiff says that because the potatoes are cooled and chilled within a sealed retort, the food is not exposed to the air when being chilled, such as occurs with mechanical systems like a blast cooler.

“If the potato salad producer were to chill the diced potatoes in a blast cooler, it will take 18-20 hours to cool it,” he says. “And in the process, it will be exposed to bacteria, mold and yeast that are being circulated through these fans on the cooler.”

Illiff adds that when food is exposed to such biological organisms, shelf life will be compromised unless the processor adds preservatives, something that consumers don’t want to see on the labels of fresh foods.

The diced potato retort, which some food processors use to cook chickpeas and other vegetables, is designed by CMI as a complete, high-quality package. The main part of the system, a cylindrical chamber loaded with carts and trays, is all stainless steel and capable of a holding a vacuum of more than 30 inches. The retort is normally between 12-22 feet long, and about 5 feet in diameter, depending on customer specifications. Smaller models can cook and cool 2,000 pounds of potatoes per hour; the largest ones can cook up to 8,000 pounds per hour.

“When you remove the diced potatoes, they are nice and cold and ready to mix with the potato salad dressing, then package and ship to the customer – all with hardly any exposure to air,” says Illiff.

A new breed of cooling tower

When you have 8,000 pounds of potatoes steaming with heat, you can’t afford to have anything less than a reliable cooling system. Otherwise you’ll end up with 4 tons of mashed potatoes. When Illiff first looked for a complete solution to cool his tots for potato salad, he understood that incorporating a cooling tower that was reliable as the rest of his system could be a challenge.

“We were very concerned about the reliability, service requirements and lifespan of the cooling tower,” Illiff says, “because our cooling system is dependent on it working correctly for a long period of time.”

In exploring the cooling available, he found that the majority of models were of the traditional, galvanized metal-clad design. Illiff was not satisfied with this kind of engineering, which promised to be maintenance intensive with perhaps frequent periods of downtime.

Eventually he found what appeared to be a highly attractive alternative to the traditional cooling tower, a design that featured a high-density polyethylene (HDPE) shell and enclosed direct-drive motor assembly that promised to provide highly reliable operation with very low maintenance.

HDPE cooling tower shells are virtually impermeable to corrosive elements, including water treatment chemicals such as chlorine and UV rays.

“We found this HDPE cooling tower at Delta Cooling Towers, the [Rockaway, N.J.] manufacturer that originally developed the ‘plastic’ design, and has installed industrial, commercial and institutional systems nationwide since the 1970s.”

Besides the HDPE shell design, what attracted Illiff to the Delta design most was the 15-year factory warranty. This was a great testimony of the lifespan that he was looking for to ensure the reliability of his retort-based cooking system.

Also, the HDPE cooling towers were available in a wide range of sizes from 10-2,000 tons.

“These cooling towers are also lighter in weight,” Illiff adds, “so that only a relatively simple stand is required to support it. We installed one recently, for example, and counting the time it took to assemble a stand for it, we had the entire cooling tower system installed in half a day.”