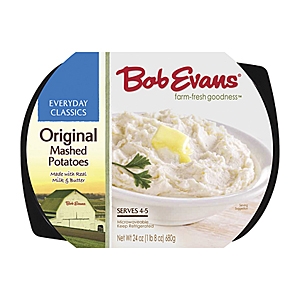 Bob Evans acquired Lima, Ohio-based Kettle Creations in August 2012, and in the fall began a nearly $27 million expansion that will double the size of the facility by adding 50,000 square feet. The company anticipates that the expansion will create 70 new jobs by 2015. In addition, Bob Evans is accelerating its Farm Fresh Refresh remodeling program. At the close of the company’s fiscal year end of April 2013, it will have remodeled 180 of its Ohio restaurants for a total investment of $43 million.

“We’re increasing our investments in the great state of Ohio,” says Steve Davis, chairman and CEO. “We’ve proudly unveiled a fresh new look at nearly all our Ohio restaurants, we’re doubling the size of our newly acquired foods plant in Lima, and we’ve taken positive steps toward a bright future for our corporate facility and two production plants in Springfield and Bidwell, thanks to the deal with New Mill.”

The 77,000-square-foot headquarters building at 3766 South High Street in Columbus is one of the last buildings on the company’s almost 40-acre campus to be sold, following the company’s March 2011 announcement that it was moving to New Albany, Ohio. Only a trucking facility on the property remains to be sold at the long-time Bob Evans campus. A plot of land on Obetz Road behind the company’s adjacent Bob Evans restaurant at 3800 South High Street in Columbus was recently sold to A+ Children’s Academy, which plans to expand its educational facilities.

In May 2012, the company announced plans for the consolidation of its foods business and stated its intent to close the Bidwell and Springfield plants in late 2013. The 43,700-square-foot Bidwell plant sits on 7.8 acres and manufactures cooked sausage patties and links. The 38,200-square-foot Springfield plant sits on 10.7 acres and manufactures sausage, soups and gravies. Bob Evans will lease the plants from New Mill until a final closing date is announced in late 2013.

“It is our intention that our headquarters and two plants will remain thriving entities in their respective communities,” says Joe Eulberg, the Bob Evans executive responsible for the campus initiative. “We believe that New Mill Capital will be a strategic and solid partner, investing in these communities and properties to realize their full future potential.”