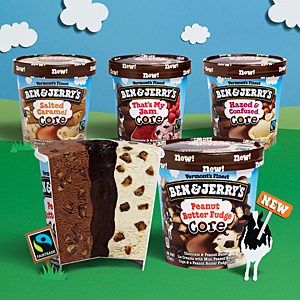 The “Core” line is modeled off Ben & Jerry’s Karamel Sutra flavor. The concept includes a core center down the middle of each flavor.

“We are always looking to make something bigger and better for our fans,” says Eric Fredette, the lead flavor developer. “We wanted to blow out the concept of fun flavors, chunks and swirls and take it over the top.”

The four new Core flavors include:

That’s My Jam: Raspberry and chocolate ice creams with fudge chips and a raspberry core

All four of the new Core flavors are available in pints for a suggested retail price $4.39 per pint.