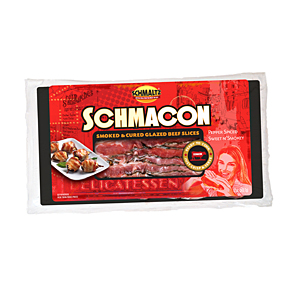 "Schmacon is delicious and unlike anything else on the market," says Bender, who is also chief executive officer. "Beef factors heavily into deli menus, and seeing what was going on with bacon, I envisioned a beef product that could capture some of the same magic."

Schmacon is lower in fat, calories and sodium than traditional bacon. The carefully-trimmed beef that is used has little fat and a patent-pending process is responsible for the crispy finish that rivals that of pork bacon. It comes ready to crisp and serve and can be prepared in a variety of ways, including the oven, microwave and stove-top.