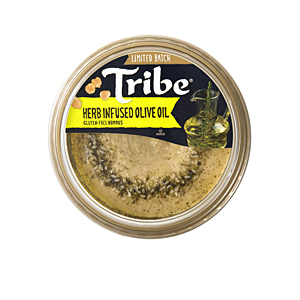 Tribe took its Classic hummus variety and blended exotic za’atar, which is a mixture of sumac, sesame seed and herbs frequently used in Mediterranean foods, and topped with dried roasted garlic, sesame seeds and then drizzled with olive oil that’s also been infused with za’tar.

“We've gained a reputation of continually introducing new and exciting flavors and flavor combinations to hummus lovers, and the addition of za'atar really delivers on that," says Adam Carr, chief executive officer. "Once again, I think we found a premium partner for our beloved chickpea."

Tribe Limited Batch Herb Infused Olive Oil can be found at fine grocery stores nationwide for a suggested retail price of $3.49 for an 8-ounce bowl.