This website requires certain cookies to work and uses other cookies to help you have the best experience. By visiting this website, certain cookies have already been set, which you may delete and block. By closing this message or continuing to use our site, you agree to the use of cookies. Visit our updated privacy and cookie policy to learn more.
Home » Cell-Based Proteins: For Cell-Based Meat Manufacturers, Success Depends on Scalability
Supply Chain & LogisticsIndustry News
COLD ALTERNATIVE PROTEINS

Nearly $100 billion. According to current research, that’s what the global cell-based meat market could be worth by 2030. It’s a number that’s attracting pioneers from biotech and food manufacturing, eager to plant their flag in this unexplored market.

But those pioneers need to consider another dollar figure: $330,000, which is what it cost to make the world’s first cultivated burger in 2013. Since then, that cost has fallen—but it’s still far from parity with animal-based protein. Even if consumers are ready to fill their plates with no-kill nuggets, they’re unlikely to empty their wallets for the privilege.

In order to lower that “patty price,” the industry needs facilities and processes that will scale efficiently — which is far easier said than done, particularly because there’s no roadmap to follow. More than half of today’s cell-based meat manufacturers have not yet moved beyond pilot scale, according to a CRB industry survey (Figure 1). To get to commercial-volume production — and to get there before the competition does, with a financially sustainable product line — these manufacturers need a plan that prioritizes scalability.

A Scalable Facility Is Key

What type of facility should manufacturers consider, and where should they put it? A single facility in which manufacturers control their product from flask to final package is ideal, but there’s an important question at the heart of cell-based meat production that makes this challenging: Is it biotech, or is it food manufacturing? Where does it leave the oversight of the Food and Drug Administration (FDA) and where does it pick up with the U.S. Department of Agriculture (USDA)? Regulators are still working out the answer. In the meantime, manufacturers must be flexible enough to keep up with the evolving regulatory framework and thorough enough to ensure safety, quality and continuity. Doing that in a single facility, under the purview of two different agencies, is a complex undertaking — and complexity tends to push costs higher.

Physically separating FDA-controlled biotech processes from USDA-controlled food manufacturing might help, although the two agencies overlap at the cell harvesting step. That means that the FDA-approved biotech plant must also have areas designed for USDA compliance. With good planning, manufacturers can keep those areas to a minimum while relying on existing sites — whether their own, or those of a contractor — for downstream product formulation and packaging under USDA oversight.

As far as locating that biotech plant, some believe that it’s necessary to go to a life sciences stronghold. Think again: experienced cell culture operators are all over the country, which means that coveted real estate in Boston or San Francisco may cost more than manufacturers really need to spend.

Of course, there are other factors to consider. If a manufacturer’s go-to-market strategy depends on selling directly to the local market, for example, they may want to locate their plant close to the demographic that’s likely to consume cell-based meat. From that perspective, Boston or San Francisco may be appropriate after all. 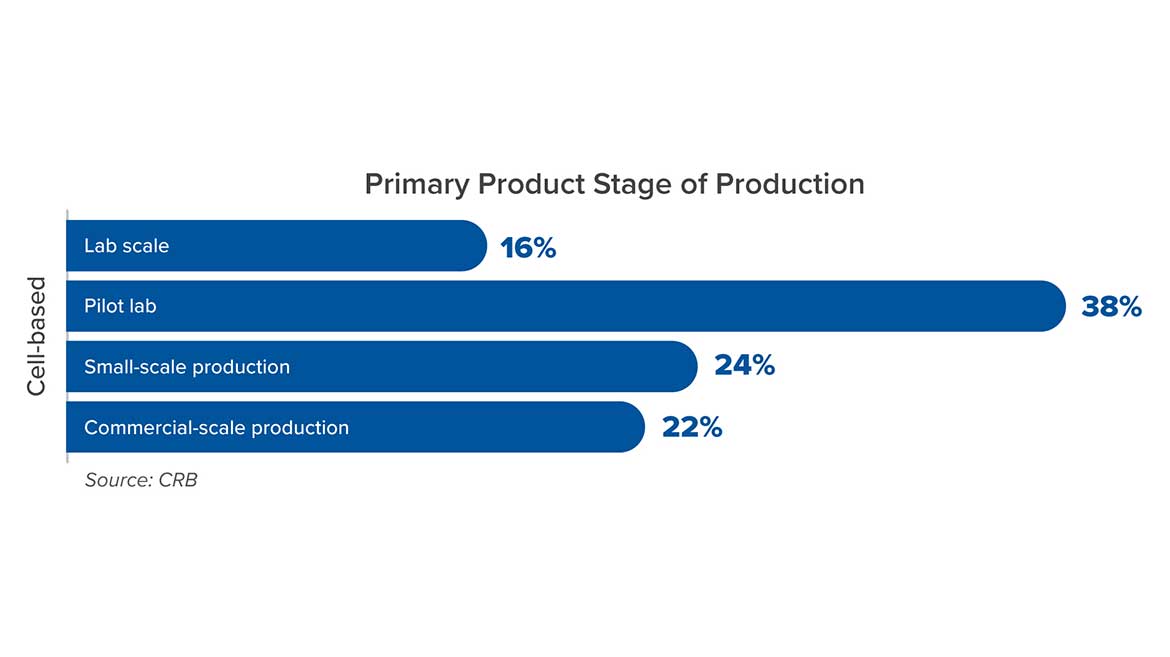 To produce a cell mass that’s ready for harvesting, manufacturers start by growing cells in small flasks. As that cell volume expands, so must the vessel that holds it. To solve this, cell-based meat researchers have looked to the pioneers of cell cultivation: biopharmaceutical developers. But the stirred-tank bioreactors common in pharma plants are not necessarily right-sized for food production. They can handle high-volume batch processing, but they’re more complex than necessary and they require a lot of facility space.

Perfusion bioreactors are a smaller alternative, and they open the door to continuous processing—a strategy for intensifying cell yield, thus lowering throughput costs. Perfusion reactors are difficult to scale up, though. Manufacturers may find themselves having to scale out instead, which reintroduces the question (and cost) of space.

Downstream of the harvesting step, as the cell mass crosses the boundary from biotech to food manufacturing, more decisions arise. How can manufacturers efficiently and cost-effectively freeze those cells for final processing? And if the final consumer-ready product is meant to be chilled, not frozen, how should manufacturers approach the thawing process? These decisions could have major cost implications as manufacturers scale to commercial volumes. If their strategy relies on spiral freezers or ammonia refrigeration systems, for example, they may be surprised by the footprint necessary to hold much higher volumes for the required residence time.

Working with process design experts to simulate refrigeration scenarios at scale will help manufacturers avoid these surprises while they navigate that nuanced FDA/USDA boundary. For example, the lower operating costs of an advanced freezer system could offset its upfront expense. Making these decisions early, while there’s still time to adapt, could help manufacturers meet their future cost and profit targets.

R&D teams might choose a parent cell line based on its initial sticker price, but that doesn’t necessarily reflect overall spending. For example, slower-growing cell lines may cost less upfront, but they tie up valuable bioreactor space, creating expensive process bottlenecks. Yield is another important factor: choosing or developing a cell line that grows more cells per milliliter will drive down the ultimate cost per pound, especially at commercial volumes.

Cell cultures need nutrient-rich media in which to proliferate. This is both a problem and an opportunity: culture media, which can cost hundreds per liter, accounts for up to 95% of the cost of goods for cell-based meat manufacturers. If they can drive down that cost, those savings will multiply as they grow their throughput.

There are a few ways to achieve this. Manufacturers could engineer a process for removing the catabolites from cultured cells, which would unlock the possibility of reusing media—a promising way to get more from every dollar spent on inputs. Another factor to consider is media quality. Cultivating cells for human consumption is not the same as manufacturing potent pharmaceuticals, and it may not require the same growth medium. By turning to non-traditional materials, such as serum-free media, manufacturers may find a way to avoid the high cost of pharma-grade goods without impacting product quality.

Will Consumers Buy Into Cell-Based Meat?

Beyond the considerations detailed above lies an even more pressing question: will consumers buy cell-based meat?

Manufacturers can influence the odds by controlling factors such as taste and mouthfeel. Getting these details right may mean incorporating plant-based proteins or other ingredients. Manufacturers who spend time on these considerations early in their process are better able to plan a cost-effective operation, avoiding expensive retrofits down the line.

To drive costs down, focus on scaling up. Getting cell-based meat to retail shelves is one thing. Offering it at a price that competes with traditional animal-based protein is another. Those who succeed will each find their own way forward, but they will share one thing: a willingness to look ahead and design today’s processes and systems with future scalability in mind.