Woodman's Markets is an employee-owned supermarket chain with 15 locations from metro Chicago to Green Bay, Wis. One of the nation’s largest and fastest- 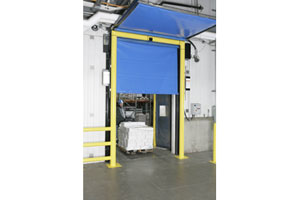 growing independent supermarkets, Woodman's stores are large warehouse-style facilities ranging from 200-250,000 square feet in size—some 3-4 times the size of typical grocery stores. In addition to on-site warehousing, these retail facilities are served by two distribution centers, including a 230,000-square-foot warehouse in Beloit, Wis.

To keep up with rapid growth, Woodman’s added several warehouse-style retail locations and upgraded its in-store warehouses. It also recently expanded the Beloit warehouse. In all cases, Woodman’s management saw the expansions as opportunities to improve productivity and energy efficiency, as well as enhance safety.

Rite-Hite’s high-speed FasTrax freezer and cooler doors have been a key component of Woodman’s improvement strategy for cold storage operations. Capable of moving at 100 inches per second (the fastest rate in the industry), the cycle times of FasTrax doors maximize energy savings by minimizing the amount of cold air that can escape each time they open and close. They also feature a perimeter thermal air seal, as well as insulated door panels. These insulated panels provide a high enough R-value to avoid the need for expensive panel defrost systems.

“We’ve had no issues with frost build-up or thermal loss with these doors,” says Nick Popp, transportation manager for Woodman’s.

In addition to specifying the FasTrax doors for new facility build-outs, Popp also began retrofitting them into existing facilities, as replacements for conventional bi-parting doors. Although the cost of a new FasTrax door is slightly higher than replacement parts for an older bi-parting door, Popp has found them to be the most economical option for a variety of reasons.

“The fast cycle times and insulating properties mean the incremental cost is paid back very quickly,” says Popp. ”Additionally, they have been such an upgrade in energy efficiency, they’ve allowed us to qualify for significant credits from Wisconsin Focus on Energy.”

The FasTrax doors also have multiple safety features, including Soft-Edge Technology and thru-beam photo eyes. Unlike traditional hard bi-parting doors, flexible FasTrax roll-up doors have the ability to withstand forklift impact and snap right back into their tracks. This is a huge benefit in a warehouse freezer or cooler space, where damaged doors can mean significant expenses in terms of downtime and service calls, as well as energy loss.

The snap-back feature rarely comes into play at Woodman’s, however.

“The FasTrax doors move so fast, they rarely get hit,” says Popp. “We’ve reduced the chances of forklift/door collisions by about 98%, and those collisions caused about 99% of our cooler problems.”

Overall, Popp installed 18 of the FasTrax doors in Woodman’s cold storage facilities, and is planning to add more in the future. In addition to improving safety and peace of mind for forklift drivers going in and out of the coolers, he’s found that the new system has also made them more productive.

“These doors have improved our time efficiency as well as energy efficiency,” he notes. “The throughput in our warehouses is higher than ever.”

Food Plant of the Future: Surviving and Thriving with Automation