New LED lighting from GE, Fairfield, Conn., will help Stater Bros. supermarket chain save approximately $570,000 in annual energy and maintenance expenses as a result of retrofitting its refrigerated display cases.

Beginning with its first store in 1936, Stater Bros., based San Bernardino, Calif., has a long history of doing right by its customers and the environment. An LED lighting upgrade was among the supermarket chain's efforts to adopt environmentally sensitive practices, along with solid waste landfill diversion, daylight harvesting with skylights and the use of high-efficiency motors in heating and cooling systems. 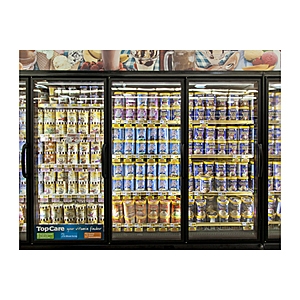 GE's Immersion RV40 LED lighting system was selected to replace fluorescent lights in the frozen food cases at nearly all of the retailer's 166 grocery stores. With installation crews completing 20 Stater Bros. stores per week, all 15,000 freezer doors were retrofitted in about 10 weeks.

By replacing 60-watt fluorescent lamps with GE's 16-watt LED lighting, Stater Bros. will use 28,444 fewer kilowatt hours (kWh) per store per year, a savings of approximately 4.6 million kWh across the 163 participating stores and equating to about $510,000 in annual savings (based on an $0.11 kWh rate and 17 hours of operation a day).