There’s a new guy on the block and he’s not messing around. 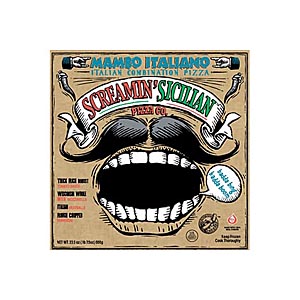 The Screamin’ Sicilian brand frozen pizza, from Palermo Villa, Inc., Milwaukee, Wis., is taking over freezers in Milwaukee supermarkets. The pizzas are over-topped with ingredients straight from farmers and purveyors of America’s Dairyland.

“Screamin’ Sicilian was created to fill a specific niche for craft pizza that is unlike anything pizza lovers had previously seen in the grocery store,” says Giacomo Fallucca, founder. “This is a frozen pizza that goes beyond frozen pizzas to a level that consumers needed to go to a pizzeria for—until now. Screamin’ Sicilian is created with care like one of the first craft beers when they hit the beer category, and we expect it to have the same effect.”

Screamin’ Sicilian brings together ingredients with over-the-top flavors atop a stone-fired, artisan crust. Each crust is then smothered with a zesty, proprietary sauce made with vine-ripened tomatoes.

Screamin’ Sicilian pizzas are currently available in select grocery stores and retailers in Chicago and Milwaukee for a suggested retail price of $8.99 each.