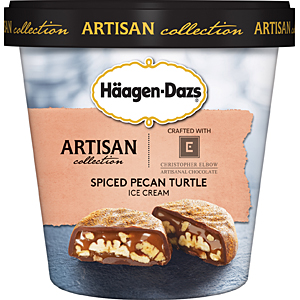 "To develop the Artisan Collection, we evaluated more than a hundred high-quality, culinary products," says Kerry Hopkins, brand manager. "After months of vetting, we identified and worked hand-in-hand with six artisans to co-create our new flavors that infuse the taste of the artisans' original creations with the rich, premium ingredients of Häagen-Dazs ice cream. Being a brand that was founded in 1960 by Reuben Mattus—by some considered the original ice cream artisan—it was imperative that we team up with artisans who embody the Häagen-Dazs brand philosophy of craftsmanship and using the finest ingredients."

Tres Leches Brigadeiro. Based in New York City, Paula Barbosa of My Sweet Brigadeiro deconstructed her Happy Couple brigadeiro—a modern spin on a traditional, celebratory sweet from her native Brazil—to make a decadent sauce and swirl it into creamy tres leches ice cream.

Banana Rum Jam. After a cold winter in Brooklyn, N.Y., friends Sabrina Valle and Jessica Quon of The Jam Stand were determined to create a homemade jam, despite many fresh fruits being out-of-season. After some experimentation, they prepared their first jam called Drunken Monkey, a new play on the classic Bananas Foster. Inspired by their homemade classic, Banana Rum Jam ingredients are swirled into a vanilla bean ice cream.

Chocolate Caramelized Oat. Claire Keane of Clairesquares in San Francisco has been crafting delicious flapjacks—a traditional Irish treat of caramelized, buttery oat bars drizzled in chocolate—from her own recipe since she was 12 years old. Inspired by her Irish treats, the Häagen-Dazs brand took chocolate caramelized oat clusters and blended them into a rich caramel ice cream.