Freeze the Food, Not the Facility

Frozen French fries should stay frozen. However, when the actual facility in which they are produced and packaged is frozen solid as well, it poses a problem. This 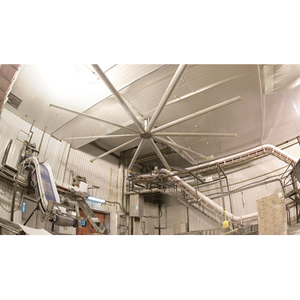 was the troublesome issue faced by the workers at the McCain Foods production plant in Carberry, MB (To learn more about McCain Foods, Refrigerated & Frozen Foods’ 2012 Frozen Foods Processor of the Year, go to page 32).

Condensation was a big issue at the Carberry plant, which is one of their 13 processing facilities in Canada. This facility was originally an aircraft hangar during World War II, and was later transformed into a frozen foods factory with a 12,000-square-foot freezer zone and 12-foot ceilings that serve as a bag-off area where products are packaged. Due to the difference in air temperatures inside and outside the freezer, chief engineer Geoffrey Aitchison saw ice accumulation on the walls and ceiling.

“We have different air pressures in the factory,” Aitchison says. “In the process area, you have very moist air that is at higher pressure than the air in the freezer. What happens is that moist air comes down through the freezing tunnels and out the conveyor holes in the wall and infiltrates the freezer.”

Because it is unsafe to have particulate matter that could drop into open containers of fries in the freezer, thus contaminating the food, the Canadian Food Inspection Agency expressed concern about the condensation issue. Every few days during shutdowns, workers would scrape the ceilings to keep the ice buildup at less than two inches. McCain Foods used small high-velocity fans to keep the air circulating and reduce ice buildup, but doing so only reached a minimal area.

In 2007, Aitchison found the perfect solution to his big problem—a 24-foot diameter Big Ass Fan, which was designed to create consistent air and ceiling temperatures.

“After two weeks, the ceiling was completely clear and it has been ever since,” he says. “The air is circulating, plus we’re warming the ceiling to the same temperature as the air, so the frost isn’t going to stay there.”

Big Ass Fans use their immense size, not speed, to move massive amounts of air throughout an entire space, from ceiling to floor and wall to wall. Due to the foil shape of each airfoil and its winglets, one 24-foot Powerfoil moves masses of air over areas as large as 20,000-30,000 square feet.

Meanwhile, condensation formed on the ceiling above a processing tank where a lot of steam was released, thus growing mold. In this area, Aitchison installed a second 24-foot Powerfoil.

“We put the second fan in the process area for energy conservation. We wanted to keep the warm air at the top of the ceiling circulating so we wouldn’t have to run the air makeup units as hard,” says Aitchison. “After running up there for two weeks, it’s the driest panel in the factory now. There’s no mold growing,”

Just like in the freezer, the tremendous air circulation abilities of the fan kept the ceiling and air temperature consistent, preventing the moisture buildup that allows mold to form.

When Big Ass Fans are used to supplement heating and cooling equipment, facilities can expect to see savings of 25% or more on energy bills. The fans are a cost-effective and an exceptional solution to air circulation problems in large spaces, something Aitchison can attest to.

Since the installation of the first fans in 2007, McCain Foods Canada has installed additional fans in other processing facilities.

“Our Big Ass Fans are a tremendous solution to the problem we had concerning energy conservation and satisfying the Canadian Food Inspection Agency Requirements,” Aitchison says.

Just the facts: Consumers use social media, but not for food

Study reveals shoppers going to the mall to eat at food court, not shop

Back Page: The joy of (not really) cooking