Label confusion currently puts the responsibility in the hands of consumers to cut through the marketing clutter at their local supermarkets. 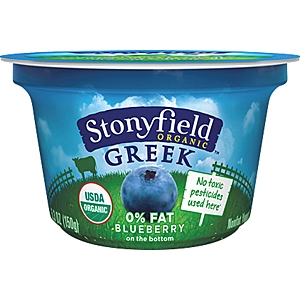 To meet this demand for clear information, Stonyfield—who uses its lids as 'tiny billboards' for information—introduced updated packaging for its organic yogurt. Now, the cups themselves are designed to help consumers easily understand more about how their organic yogurt was produced.

Beginning in the fall of 2013, Stonyfield rolled out a complete makeover of its full product line. The new packaging features a larger, more prominent Stonyfield Organic logo and two new callouts to highlight how the yogurt is produced. On the front of the package, a callout states the yogurt was made without the use of toxic-persistent pesticides. The back of the cup features a signed note by Gary Hirshberg, chairman and co-founder, that reads, "It's a complex world. But this yogurt is simple. We make it without the use of toxic-persistent pesticides, artificial hormones, antibiotics and GMOs."

Setting the record straight with pesticides
“Not all yogurts are created equal." Case in point: some are healthier than others. Yet, a majority of Americans are concerned about pesticides in the food supply, according to a survey of 1,000 American consumers. The survey, conducted by Lindberg International on behalf of Stonyfield, Londonderry, N.H., 71% of Americans are worried about pesticides in their food and almost three out of four respondents (74%) would like to eat food produced with fewer pesticides.

With so many people expressing a desire to avoid these chemicals, the study found a good deal of confusion when it comes to food labels, which is considered to the best way to know if pesticides are used in the production process. In particular, confusion arises when comparing the marketing buzz term "natural" to the USDA Certified Organic seal. In fact, more than half (56%) of respondents incorrectly identified organic attributes such as "made without the use of toxic persistent pesticides" and "made without the use of synthetic hormones" to products labeled natural.

Currently there are no standards for the term "natural" on food labels. Purchasing foods with the USDA Certified Organic seal is the only guarantee that the item was produced without the use of toxic persistent pesticides, synthetic hormones, antibiotics and genetically modified organisms (GMOs).

This is true of all foods, even those that enjoy a healthy halo like traditional and Greek yogurt.

"As a yogurt maker, of course I want more people to eat more yogurt," says Hirshberg. "But, it's important to know not all yogurts are created equal. People are being misled by the healthy halo food products labeled natural. That's why all Stonyfield products are certified organic. Besides knowing your farmer, the certified organic seal is the only way to be absolutely certain things like toxic-persistent pesticides aren't being used to make your food."

"Despite promises that the use of GMOs would reduce our dependence on pesticides, the opposite is happening. In fact, overall, pesticide use has increased by 7% since GE crops were introduced and 42 million pounds of pesticides are used annually for producing the feed given to dairy cows that produce non-organic milk products. Unfortunately, nowadays, even so-called 'natural' yogurts may still be made with milk produced by cows fed GMO grains. Choosing organic foods is the only way anyone who wants to avoid these practices can do so," adds Hirshberg, who is also co-chairman of Just Label It, a legal petition calling for the mandatory labeling of GE foods.

Furthermore, nearly half (48%) of respondents said they want to know more about how food is produced, but don't know where to get the right information. A full 79% of respondents said that they think food processors should provide more information to consumers about the way their products are grown and manufactured. Among parents, that number was even greater (83%).