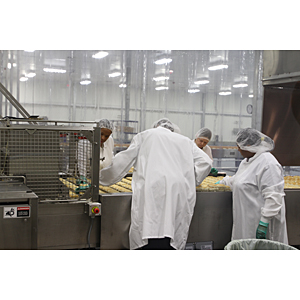 The 93-year-old company, which is said to pioneer the fast food hamburger and later the frozen distribution of its iconic Slider, built a $19.4 million production facility near the Dayton International Airport. The plant opened in December 2013.

“We’re excited about the opportunity to add a second shift in July, provide more than 100 jobs and make an economic impact on the Vandalia community,” says Lisa Ingram, president. “Over the years, the frozen food business has grown quickly, and this manufacturing facility will allow White Castle to keep up with demand by producing frozen Sliders to feed the legion of Cravers everywhere.”

The nearly 80,000-square-foot building was built on a 17-acre plot and is expected to employ 120 team members by 2017. In addition, the project is certified LEED Gold by the U.S. Green Building Council. This is White Castle’s third frozen food plant.

“This new state-of-art production plant is an important growth opportunity for White Castle,” says Rob Camp, vice president of White Castle food products division. “The increased production coming from Vandalia will allow Cravers to savor the taste of our iconic Sliders as we expand our distribution to U.S. military bases around the world.”