This website requires certain cookies to work and uses other cookies to help you have the best experience. By visiting this website, certain cookies have already been set, which you may delete and block. By closing this message or continuing to use our site, you agree to the use of cookies. Visit our updated privacy and cookie policy to learn more.
Home » Suja Juice—Producing a drink for every lifestyle
Refrigerated Foods Processor of the Year
2018 Refrigerated Foods Processor of the Year

Suja Juice—Producing a drink for every lifestyle

When Suja Juice was established in 2012, it was created with one goal in mind—to get the best quality organic and non-GMO juice into as many hands as possible. Fast forward to today, and Suja is said to be one of the nation’s leading organic and cold-pressed juice brands, raking in close to $110 million in sales in 2017 and producing close to 50 different SKUs.

But, it’s the company’s large-scale use of organic, non-GMO fruits and vegetables, implementation of high-pressure processing (HPP), acquisition of a produce distributor and a partnership with Coca-Cola Co. that garnered Suja as Refrigerated & Frozen Foods’ 2018 Refrigerated Foods Processor of the Year. (For more on the company’s newly developed 200,000-square-foot manufacturing plant, go here).

Suja was founded by four diverse San Diegans from four different walks of life who shared a dream to help consumers transform their lives through conscious nutrition.

Co-founder Annie Lawless had been juicing her whole life.

Her friend Eric Ethans was a raw food chef, and spent his entire life researching and pairing ingredients to create healthy meals.

And, the rest is history.

Lawless, Ethans, Brennan and Church formed Suja, which means long, beautiful life, and embodies the promise that flows from the cold-pressed beverages it delivers in each and every bottle.

“When we started five years ago, we were only 5% of the ultra-premium juice segment. Today, we are 44%. That’s an amazing growth trajectory and penetration in just five short years,” says Church, co-founder and CEO. “When we began Suja, we knew that to achieve our mission of democratizing organic juice that we would have to build a cost structure that would permanently support the scale and economics that will enable Suja to become not only a $500 million brand, but also a profitable entity that is able to ensure long-term commitment to affordable organics.”

Suja started out with several flavors of organic, non-GMO, HPP juice in 16-ounce bottles, which would later become the core of Suja’s Classic line of cold-pressed juices.

“Suja partnered with Whole Foods Market to co-create a new line called Suja Elements, an exclusive line of mission-driven, cold-pressured smoothies at an accessible price point,” says Church. “As part of the Suja Elements Cause Collective, 20 cents from every bottle sold went to non-profit organizations across the country. Over a few years, the total donations were nearly $1 million, which for a startup, is unheard of in terms of early philanthropy. This partnership led to Suja being named the 2014 Supplier of the Year by Whole Foods Market.”

Also in 2014, Suja introduced Suja Essentials (which is now just known as Suja), a line of high-quality, organic, non-GMO cold-pressed juices. The line consists of 14 SKUs, and includes flavors such as the low-sugar, greens-heavy Mighty Dozen and spicy, tart, probiotic-infused Daybreak Probiotic. Select Suja flavors are available in 46- and 59-ounce, multi-serve bottles, sold at Target, Kroger and Publix.

Within the Suja line is the Organic 1-Day Renewal, a collection of juices designed to help jump-start a healthy eating program. The three juices in the 1-Day Renewal—Daybreak Probiotic, Noon Greens and Twilight Protein—are designed to be consumed in conjunction with healthy mini-meals throughout the day.

In 2015, Suja rebranded its mainstream line of HPP juices and smoothies, dropping the word “Essentials” from its labels and more prominently calling out the products’ organic formulation and ingredients.

“Roughly half of Suja’s new product innovations come from retailer-driven ideas,” says Church. “For example, Costco approached Suja about potentially developing a line of Kombuchas, and entering the sparkling drinks market with a low-sugar alternative was something Suja was interested in exploring. The other half of Suja’s ideas for new innovation comes from internal initiatives in certain areas, market research and consumer testing. Suja is able to take ideas to market in as little as eight weeks, so it’s a fast innovation cycle.”

From a manufacturing process standpoint, HPP and clean labels are the nexus of where fresh, healthy food and beverage are going, according to Church.

“HPP only minimally impacts the chemical-based nutrients, as it uses pressure instead of heat as a kill step. Depending on the beverage, heat-based treatments like pasteurization can have detrimental sensory effects, resulting in unhealthy natural flavors being added back to improve the taste. HPP can be the vehicle in which brands are able to offer minimally treated products that fit in perfectly with the trend of ‘fresher,’ ‘innovative,’ ‘clean label’ and much more,” he adds.

That’s why in 2014, Suja acquired its own produce distributor, Jack Family Farms, a certified-organic farm located in Brawley, Calif. Soon after, Suja purchased Jack Brothers Distribution, tapping into the company’s long lineage of farmers and utilizing their direct connections with the farms to contract grow.

“As Suja continued to grow and scale (the company now uses more than 1 million pounds of fresh organic produce per week), it was important for Suja to plan, forecast and control the supply instead of relying on the open market,” says Church. 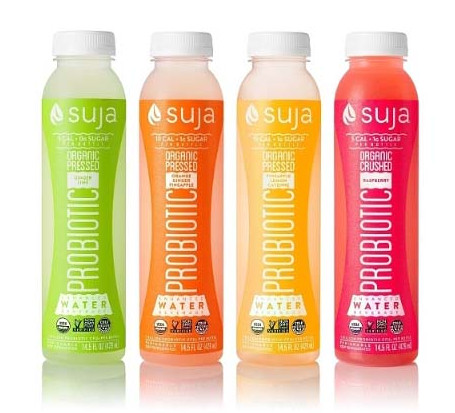 Suja’s pressed probiotic waters are an enhanced water made with nothing but organic fruits, vegetables and vegan probiotics.

“The closing of these deals provided Suja with the expertise and accessibility to further increase product distribution and operational efficiency, as well as the ability to expand its manufacturing facilities to increase capacity in response to growing demand,” adds Church.

As Suja approaches Year 3 of its partnership with Coca-Cola, the company plans to introduce collaborative products and utilize the Odwalla distribution system, which has allowed Suja to continue to get cold-pressed, organic and non-GMO beverages into as many hands as possible.

Meanwhile, in late 2016/early 2017, Suja moved its company headquarters and production facility from Miramar, Calif., into a 200,000-square-foot plant in Oceanside, Calif. This move brought the company’s cold produce storage and processing facilities under one roof, further streamlining logistics and operations.