This website requires certain cookies to work and uses other cookies to help you have the best experience. By visiting this website, certain cookies have already been set, which you may delete and block. By closing this message or continuing to use our site, you agree to the use of cookies. Visit our updated privacy and cookie policy to learn more.
Home » Cover Story: Sustainable Solutions, Renewable Results for Cold Foods Processors
Energy ManagementPackagingSupply Chain & LogisticsIndustry News

What today's food processors and others along the cold chain are doing to conserve energy and reduce waste.

Sustainability can be defined as activities good for the long-term health of the planet. Cold food and beverage processors know sustainability can be healthy for the bottom line too, through reduced waste of materials, streamlined packaging and use of renewable energy, albeit after an initial investment in equipment and start-up expenditures. There’s also the peripheral benefit of goodwill from clients for “doing the right thing” environmentally, which reinforces business relationships.

Our coverage of Taylor Farms’ renewable energy program in our March issue piqued our curiosity for what other companies are doing today (Taylor’s wind turbine is this issue’s cover photo too), so here we’ll dive deeper into additional areas of sustainable success from those along the cold chain.

An F&B processor can produce waste in a variety of ways: through excessive amounts of packaging, overuse of energy sources, or the large-scale misuse of raw materials, ingredients, and the natural resources to process those items, like clean water. Today’s manufacturers are more aware than ever of the interconnected nature of the waste they generate, and how it can ripple across the cold chain.

“I think the next set of industry accomplishments will be centered on reducing food waste throughout the supply chain,” says Tom Raymond, director of environmental sustainability at Hormel Foods. “We do not want to invest water and energy into an ingredient or food product only to see it converted to waste. There are talented organizations engaged in reducing food waste and we will see substantial progress as we work together.” 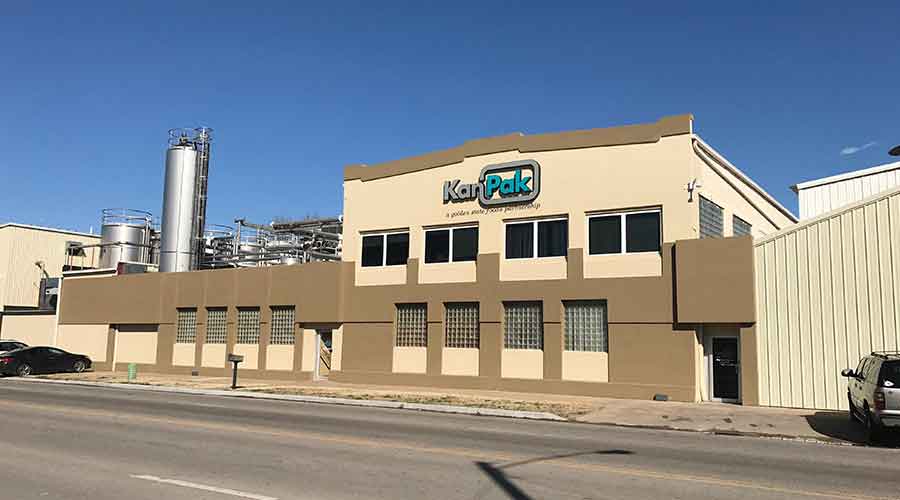 Hormel’s current sustainability initiatives started to take shape in 2000, and by 2006 they released their first corporate responsibility report. The focus on sustainable processing has, by 2018, led to Hormel reducing its water usage by 61 million gallons; dropping its solid waste by 72 tons; and saving 2.5 million pounds of unnecessary packaging.

At KanPak—a subsidiary of Golden State Foods—packaging is also a major focus of their sustainability plans. “We know our customers continue to look for ways to cut costs and reduce waste, so we’re providing new packaging technologies that include portion control options and provide a longer product shelf life. Currently, we’re working on film packaging variations that deliver significant reductions in the amount of materials used,” says KanPak President and CEO, Larry McGill.

The focus on streamlined packaging, especially aseptic packaging—which allows perishable foods like dairy products to be held at room temperature during shipping and storage for an extended period of time—has helped KanPak recycle 96% of its waste in 2019, aiming for a higher return in 2020. Other companies that work with KanPak also contribute to their recycling program by “providing us with bulk totes and plastic pallets that we return to them for re-use, further helping in our efforts towards zero waste,” McGill says.

Another area serendipitously contributing to sustainable packaging is high-pressure processing (HPP), known primarily as a food safety solution allowing fresh foods like salsa, guacamole, dips, meats and more to be preserved inside their containers. One positive byproduct of the process is that it doesn’t require an extra step to move the product to consumer packaging.

“Since HPP happens inside its finished packaging, the packaging waste is minimized, and the packaging mode can be optimized to reduce packaging material use for e-commerce and direct-to-consumer shipment, as well as retail,” says Prem Singh, president and chief technology officer at Teinnovations. “The HPP process also extends the shelf life of food products, and thus reduces waste, a serious global concern.” 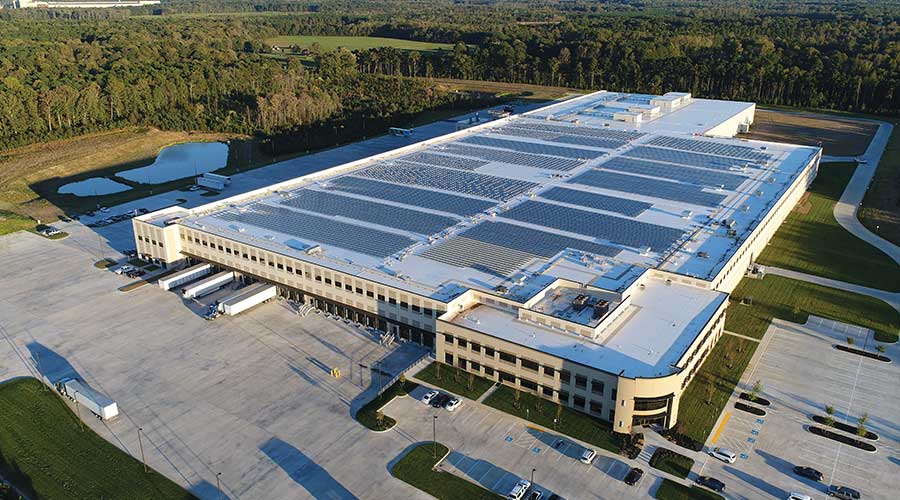 This Aldi distribution center in Virginia is one of A M King’s sustainable energy projects featuring rooftop solar panels and LED lighting.

Reduced use of utilities-based energy sources like electricity, and increased use of alternative energy to power F&B processing plants is another industry shift realizing significant results in recent years. Hormel’s efforts have seen the company reduce its total energy use by almost 38 million kWh, and its greenhouse gas emissions by nearly 9,000 metric tons.

“We have focused on areas material to our operations, including sourcing renewable energy,” says Raymond. “For example, we recently launched an on-site roof and ground-mount solar array at our Swiss American Sausage Company manufacturing facility in Lathrop, California. Our engineering teams also continually explore projects that reduce energy and water use and improve process efficiencies. For example, when focusing on energy efficiency we have executed projects impacting the building envelope, like insulation; services, like HVAC; and processes, like refrigeration and heat recovery.”

One of the early factors that kept renewable energy from becoming the industry standard years ago was the high upfront costs of investing in solar, wind and fuel cell power, for example, and the perception that those were strictly optional energy sources. That thinking has evolved in recent years.

“Solar power considerations for facilities were incentive driven in the past. Now, we’re seeing more clients require solar power at their facilities regardless of location and incentives. New energy codes have continued to be more stringent and taken what were once considered premium options and made them the norm,” says Dan Crist, VP of operations for A M King—a design-build firm that has worked on numerous new-build and renovated food processing facilities around the country.

Crist adds that an additional layer of savings can be found in the components that use that renewable energy within the plants, like Variable Frequency Drives (VFDs) for refrigeration equipment, and lighting.

“During the early years, LED fixtures could cost five times more than traditional lights.  Now, LED fixtures can be found at a similar cost, and we are designing LEDs into all new projects. I recall a project nearly 10 years ago where a specific fixture cost nearly $1,000 each; now the same fixture is half as much, if not cheaper,” remembers Crist. “Depending on the scope of sustainable materials and practices, facilities may see energy costs cut in half compared to material, equipment and systems of the past.”

Cold Foods Processors to Watch in 2021