This website requires certain cookies to work and uses other cookies to help you have the best experience. By visiting this website, certain cookies have already been set, which you may delete and block. By closing this message or continuing to use our site, you agree to the use of cookies. Visit our updated privacy and cookie policy to learn more.
Home » Greenleaf Foods: Our 2021 Refrigerated Foods Processor of the Year
Refrigerated Foods Processor of the YearNew Retail ProductsPackagingSupply Chain & LogisticsIndustry News

Last year was a milestone for the plant-based foods industry, as record sales—driven initially by pandemic stockpiling—put the category and its corresponding products on more tables than ever before. That momentum was growing even before coronavirus, as consumers increasingly look for ways to improve their health, and see plant-based foods as a path to achieving their goals.

As a result, the category has been flooded with startup companies, while established brands are doubling-down on R&D to expand product variety and their customer base. All processors have attached themselves to the health halo that hovers over plant-based foods, and the environmental benefits associated with it.

Because of the increased competition, established plant-based brands need to define themselves further to stand out to consumers, and last summer, that’s just what Lightlife Foods did in a bold move to distance itself from category peers.

In an open letter to Beyond Meat and Impossible Foods—two brands meticulously replicating meat-based products to look and taste like the real thing—Dan Curtin, president of Greenleaf Foods, which has legacy vegetarian/vegan brands Lightlife and Field Roast under its umbrella, drew a line in the garden, so to speak, for Lightlife’s plant-based burger. 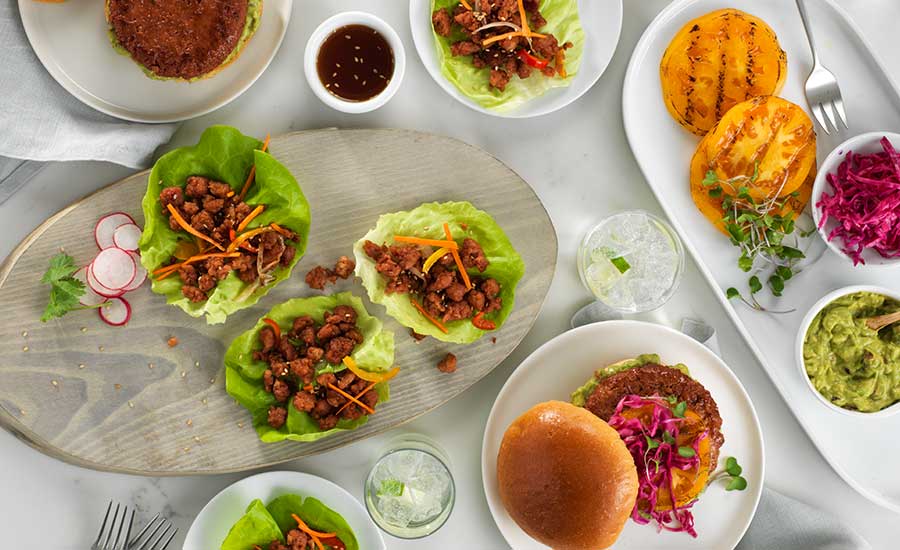 Greenleaf Foods continues to expand the versatility of Lightlife and Field Roast plant-based products to support all meal occasions. (All photos courtesy of Greenleaf Foods). 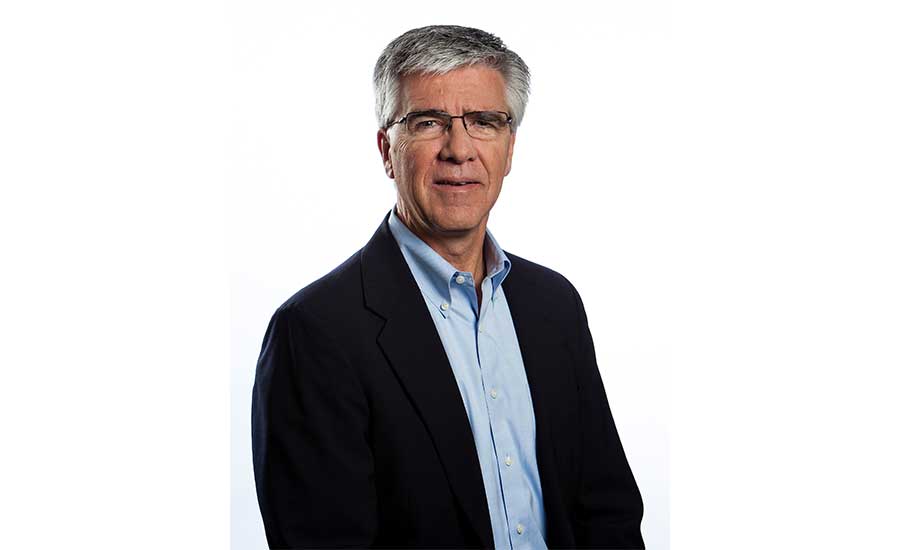 "Foodservice is a big focus for us, and we’ll have some exciting announcements in 2021,” says Greenleaf Foods President Dan Curtin."

“While we want the same things—a greener planet and a more sustainable food system—at Lightlife, we have chosen a very different way to get there. We’re making a clean break from both of you ‘food tech’ companies that attempt to mimic meat at any cost,” Curtin wrote. “We are making a clean break because the real future of protein is cleaner, tastier, and nutritionally superior. We’re going beyond, and it isn’t impossible. In fact, we’re already on the way.”

The move generated much publicity, but the open letter wasn’t just marketing—Greenleaf backed it up by reformulating most of the 53 combined Lightlife and Field Roast products for improved flavor, creating new items along the way, and whittling down ingredients to the basics. Both brands also have new packaging that’s not only sustainable, but labeled clearly as a better-for-you, better-for-the-planet consumer choice.

Because of Greenleaf’s efforts to push the plant-based category forward while supporting their intentions as a Social Purpose Corporation (SPC) by being the only plant-based food company that is carbon neutral, Refrigerated & Frozen Foods is naming Greenleaf Foods our Refrigerated Foods Processor of the Year. 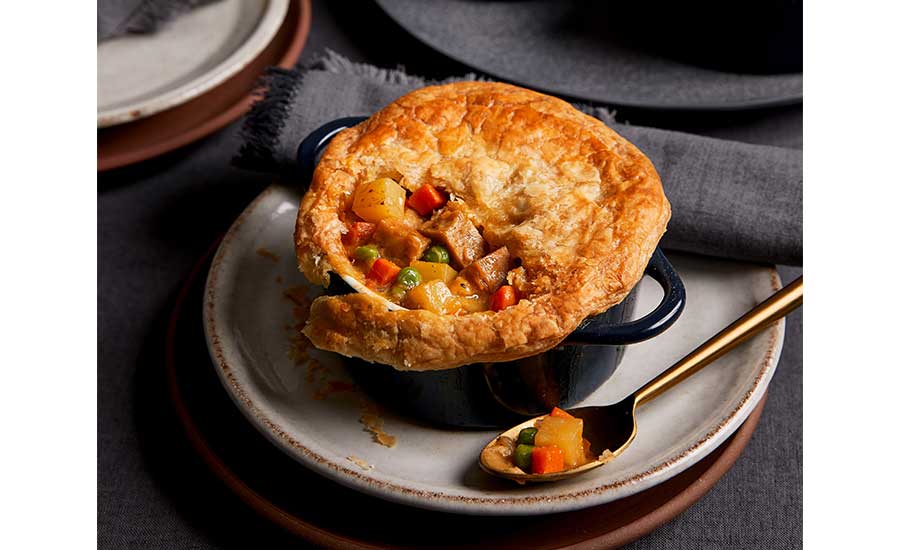 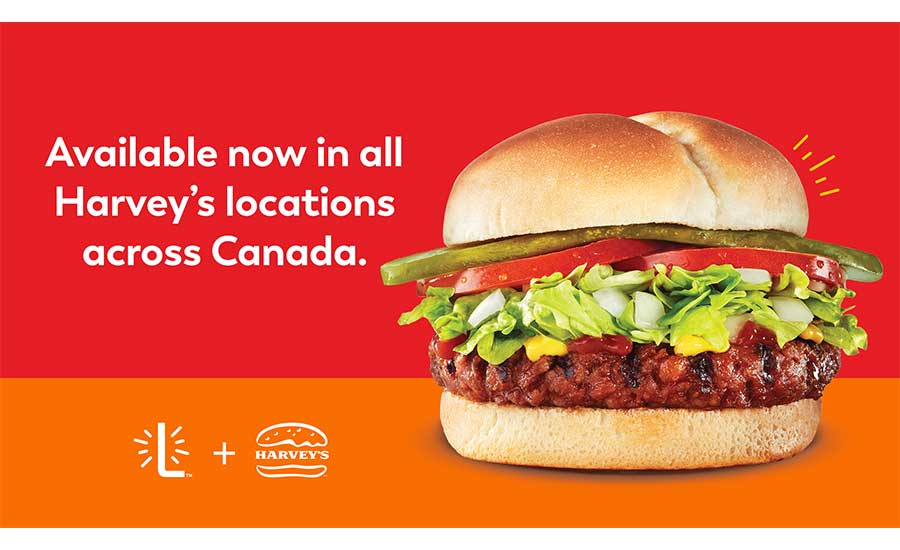 Field Roast (L) has a variety of plant-based proteins that can be incorporated into dishes like this vegetarian pot pie. Meanwhile, Lightlife’s reformulated burger (R) was rolled out at 250 Harvey’s restaurants in Canada last year.

“The recognition means quite a lot given everything we’ve all been through the past year,” says Adam Grogan, COO of Greenleaf Foods. “What I like most about the award is that it’s ‘Processor’ of the Year. The reason why the word processor matters to us is there’s a lot of competitors that have jumped into the fray lately that don’t have their own manufacturing and supply chain, but we do. We have 550 associates that wake up every day trying to figure out how we can give our customers great tasting, safe products. So we’re extremely proud of our team and we’re on a mission to provide plant-based protein for an exponentially growing consumer base.” 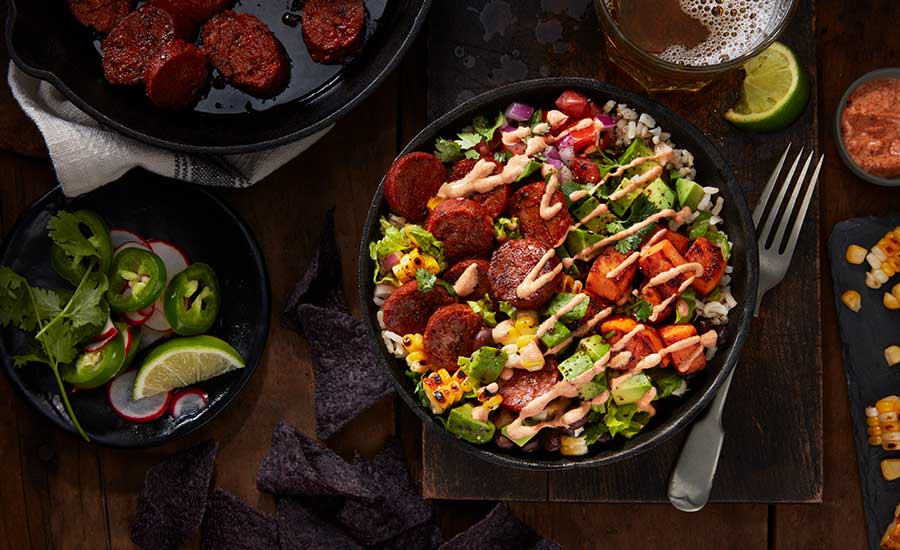 Field Roast redesigned its packaging in 2020, and partnered with celebrity chef Roy Choi to help position the brand as a plant-based choice for culinarians. Pictured is pan-seared Field Roast Spicy Mexican Chipotle Sausage in a Latin-themed dish. 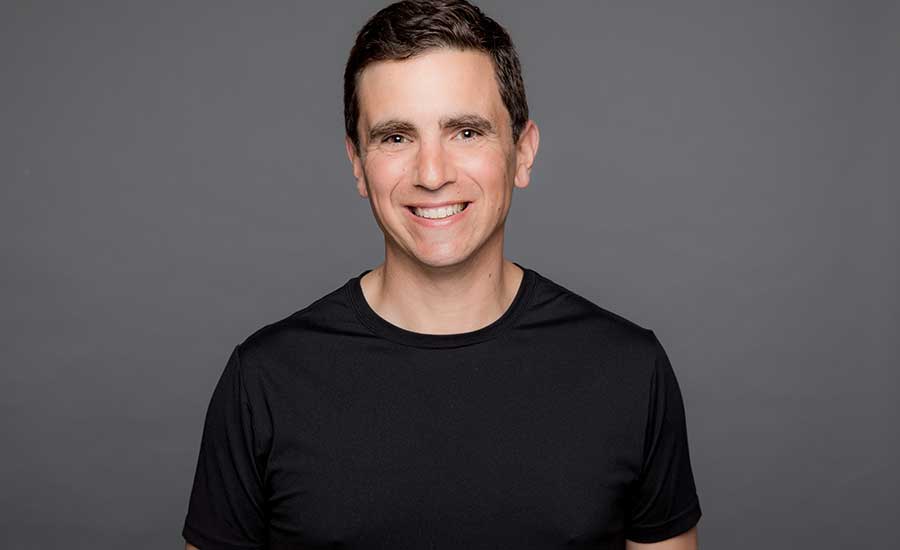 “There’s a lot of competitors that have jumped into the fray lately that don’t have their own manufacturing and supply chain, but we do,” says Greenleaf Foods COO, Adam Grogan. 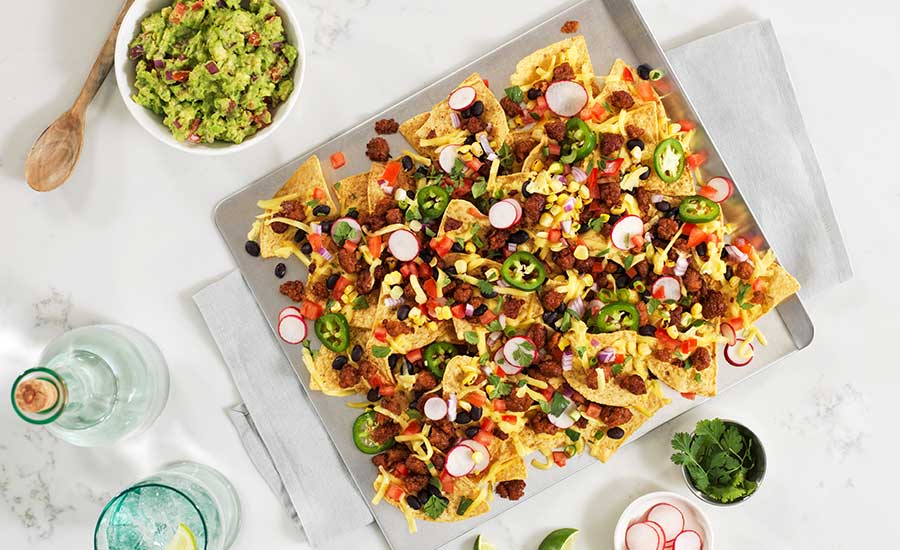 Lightlife’s Plant-Based Ground replicates ground meat and is versatile enough to be used in chili, lasagna, nachos, and more.

Greenleaf is the plant-based branch of Canadian-based Maple Leaf Foods, one of the largest protein processors in North America, now in its 30th year. While Maple Leaf made its mark in packaged meats for retail and foodservice, the company acquired the Lightlife and Field Roast brands in 2017 and 2018, respectively. Then, it created Greenleaf Foods in 2018 to oversee and grow this new plant-based segment of its operations. Since then, Greenleaf has steered each brand into new product territory and expanded distribution—Lightlife and Field Roast SKUs are available in over 30,000 stores today.

Foodservice is another target for Greenleaf. The company produces a private-label line of plant-based foods called Green Origin for broadliner Performance Foodservice that launched last November, and prior to that, partnered with Dot Foods to make Lightlife and Field Roast available to Dot’s customers. Lightlife is also on menus in places like Dave & Buster’s, the United Center in Chicago—home of the NBA’s Bulls and NHL’s Blackhawks—and last July, launched its reinvented Lightlife Burger at more than 250 Harvey’s locations across Canada.

“Our foodservice business is growing significantly,” notes Curtin. “Everything was paused early in 2020 due to COVID-19 shutdowns, but foodservice is a big focus for us moving forward, and we’ll have some exciting announcements in 2021.” 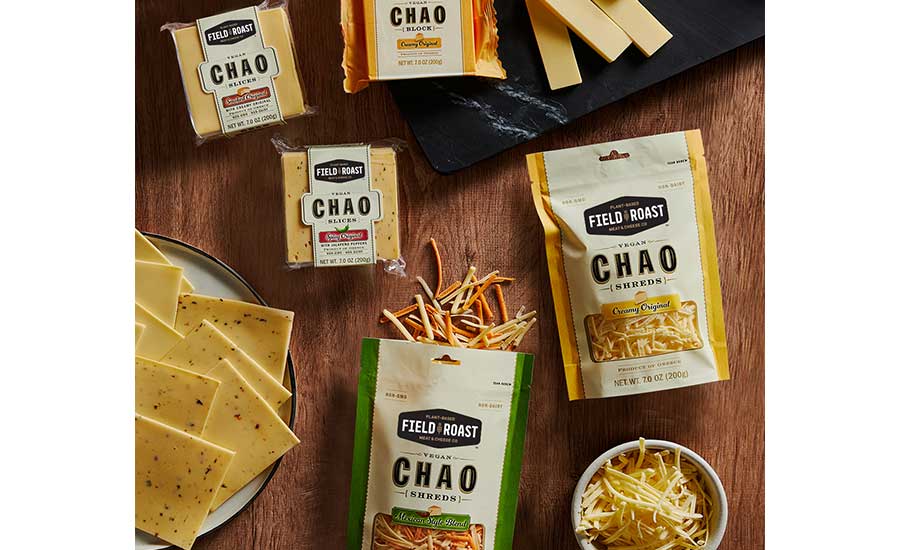 One of Field Roast’s top sellers is its Chao vegan cheese, which is made with fermented tofu. The brand rolled out five new varieties in 2020.

Both Lightlife and Field Roast were started long before Maple Leaf Foods’ acquisition of each. Lightlife began in a converted Massachusetts car wash making tempeh—the company was originally known as Tempeh Works—changing its name to Lightlife in 1984. Aside from tempeh, the brand’s signature product is its Smart Dogs, the top-selling plant-based hot dog in the States, and among the Lightlife SKUs recently receiving a makeover.

Field Roast was founded in 1997 by Seattle chef David Lee, with its signature product a vegetarian loaf roast that could replace a traditional animal-based roast for dinners and holidays. The company subsequently branched out into sausages, hot dogs, burgers (sold in stadiums as well as stores) and more before becoming part of Greenleaf in 2018. One of the company’s top-selling products today is its Chao vegan cheese, made with fermented tofu, which expanded last September to include five more varieties—slices, shreds and a block—of original, smoked, spicy, and Mexican-style flavors.

Today, Lightlife products are still made in Turner Falls, Massachusetts, while Field Roast items continue to be created in Seattle. A third plant currently under construction in Shelbyville, Indiana, will process products for both brands. Greenleaf’s company headquarters are in Elmhurst, Illinois.

“These are truly North American brands that we’ve doubled or tripled in size since we acquired them in 2018,” Grogan says. “We’ve spent a great deal of time evolving these brands to be innovative and progressive, and accelerating their growth in terms of scale.” 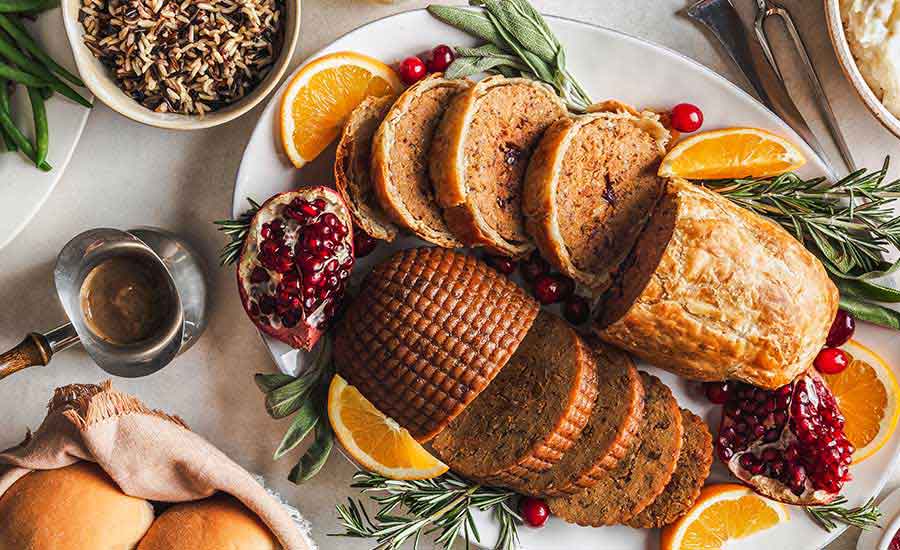 Field Roast was founded in 1997 by Seattle chef David Lee, and its first products were plant-based roasts, which are still sold today.

In 2019, Greenleaf conducted extensive market research into the plant-based category, with the intention of learning exactly what consumers wanted out of a plant-based product. They interviewed 11,500 people, whose feedback has informed the direction of Greenleaf’s R&D since then. It was especially important to have that data as a differentiator for the company, since the category today is crowded and multi-faceted—consumers are now making decisions about what kinds of plant-based products they buy.

“We learned there are three core drivers for why a consumer enters the plant-based category. Number one is health and well-being. Number two is environmental issues, and the third is any other ancillary ethical concerns that are the roots of vegetarian and vegan products,” says Grogan. “We learned 93% of new entrants into the category are flexitarian, which means in their shopping cart, they could have chicken, beef, and a plant-based product, for example.

“That information is driving our innovation in a few different ways,” Grogan continues. “First, people who are new to the category may be wary of how this food is made and they’re concerned about the ingredients, but there’s a general interest in trying it. Once they try it, there’s an awareness of how it’s made and why it’s different. Second, consumers are saying it has to taste good. So our mission is to figure out how to continuously focus on the integrity of the ingredient panel, and also make the food taste fantastic. And that doesn’t always mean mimicry of meat, for example, because sometimes mimicking meat to its truest extent can be counter to the first point learned in our research, which is a desire to improve health and well-being.”