This website requires certain cookies to work and uses other cookies to help you have the best experience. By visiting this website, certain cookies have already been set, which you may delete and block. By closing this message or continuing to use our site, you agree to the use of cookies. Visit our updated privacy and cookie policy to learn more.
Home » 2018 Frozen Foods Processor of the Year: Sweet Earth Enlightened Foods - The fresh face in frozen foods
Frozen Foods Processor of the YearIndustry News

When husband-and-wife team Brian and Kelly Swette launched Sweet Earth Enlightened Foods, it was a small 6-employee company that operated out of the Swettes’ (pronounced “Sweetie”) dining room. Brian, co-founder and president, toured close to 25 facilities to find a home for its ever-expanding manufacturing operation.

No. of Processing Lines: 4

No. of Packaging Lines: 4

Then, he visited Moss Landing, Calif., a marine sanctuary situated just 15 miles north-northeast of Monterey, Calif. There, nestled in between land, produce fields and an abundance of local farms was an abandoned warehouse.

“This is the place,” Brian says. “So, we bought it, we renovated it and in three months, started producing food.”

Today, the 38,000-square-foot plant is home to 200 employees, and produces 48 SKUs of frozen meals, burritos, breakfast sandwiches and chilled plant-based burgers and proteins sold in more than 10,000 stores, including Whole Foods, Target, Walmart and Kroger nationwide. CLICK HERE for more on the company.

This is Sweet Earth, the recipient of Refrigerated & Frozen Foods’ 2018 Frozen Foods Processor of the Year award and a fresh face in the frozen foods aisles. 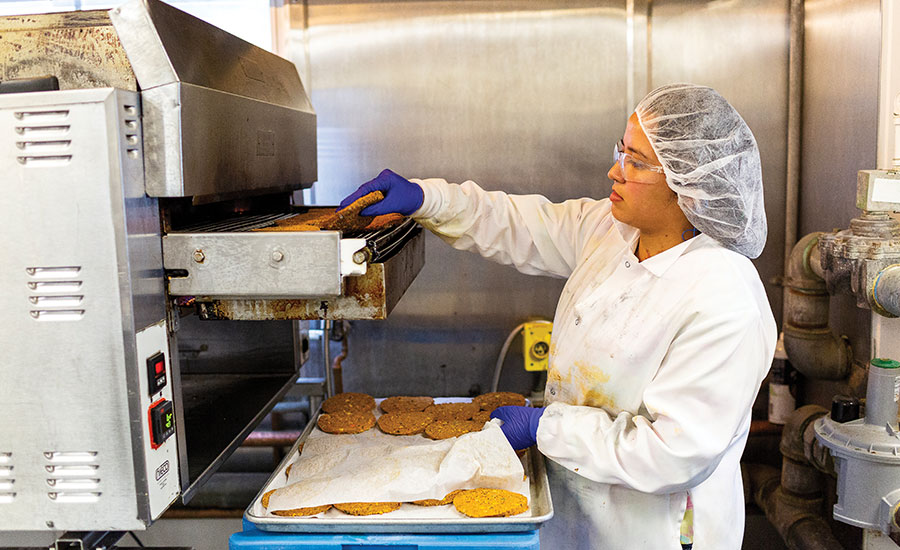 At the time of Refrigerated & Frozen Foods’ visit, Sweet Earth was processing the Santa Fe burger, which is said to be the flame-broiled veggie burger on the market.

“We want to do something that’s unique, that’s true to us and will build the frozen foods category and drive sales,” says Brian.

The vegan bacon comes in frozen loaves, then cooks in a metal cage to maintain the integrity of the shape before being sliced and placed five to a tray. Meanwhile, employees manually scrub on the company’s signature hickory and sage sauce. The bacon trays then enter the cooker for about 90 minutes, before being pasteurized, packaged and sent to the cold storage facility next door. 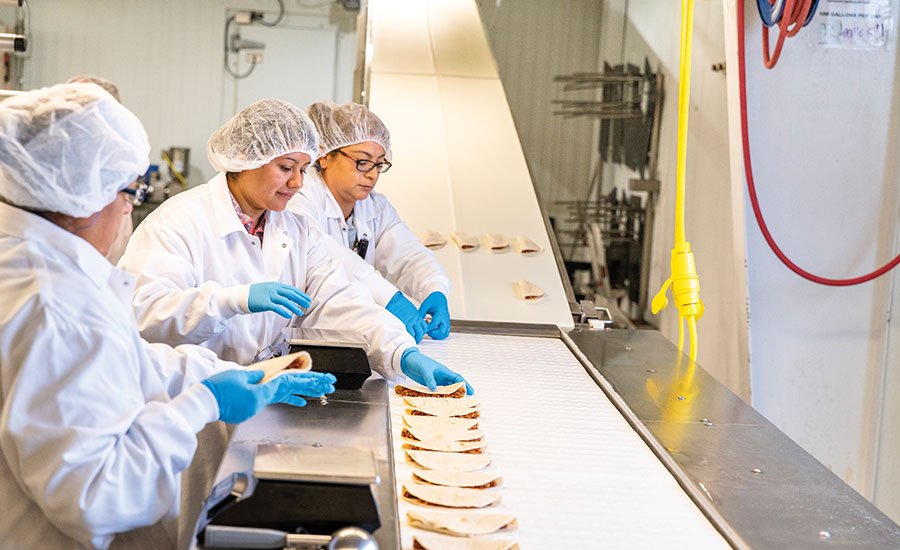 Sweet Earth is said to boast the highest tortilla-to-fill ratio in the industry.

In Kitchen 1, Sweet Earth was processing the Santa Fe burger. Ingredients such as black beans, corn, sweet potatoes and green chilis are manually dropped in a mixer, then enter a patty former before conveying through a checkweigher. Then, the patties are grilled for 2.5 minutes before being placed on a cooling rack and carted into the cooler. Once the product reaches -40°F, the burgers are packed and sent through pasteurization before going back into the cooler.

“We’re the only one who makes a veggie burger that is ‘flame-broiled.’ It’s part of our authenticity,” says Brian. “Part of the reason we incorporate grill marks is because it caramelizes the ingredients, makes it crispy on the outside and moist on the inside.” 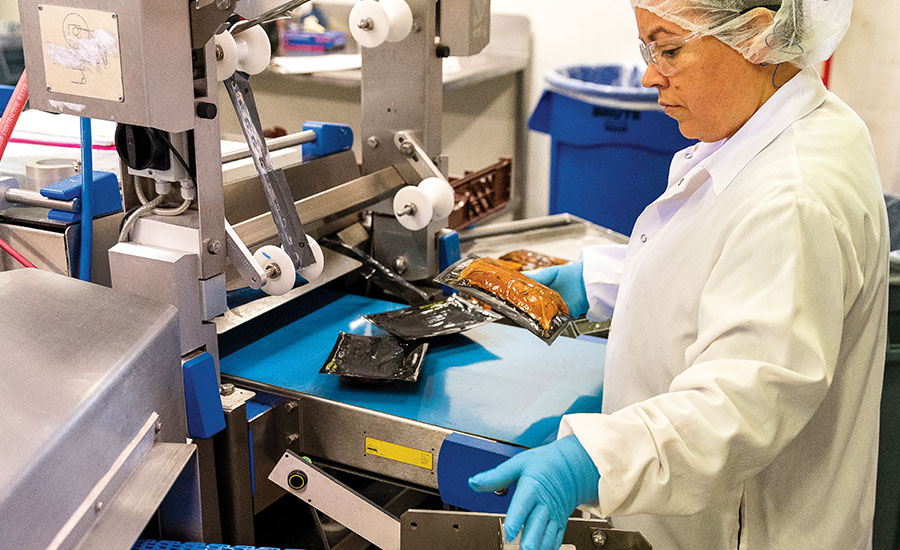 Here, Sweet Earth’s plant-based Benevolent Bacon undergoes pasteurization before being packaged and sent to the cold storage facility next door.

In Kitchen 2, operators slice up all the fresh, raw ingredients for Sweet Earth’s Big Sur breakfast burritos. For example, an operator drops whole onions into an automatic slicer to be pureed, while another operator mixes tomatoes and spices to develop one of the company’s patented sauces. Sweet Earth produces about 20 barrels of its own sauces a week, according to Ander Rochefort, production manager, who came from Nestlé USA, shortly after the Arlington, Va.-based food processor acquired Sweet Earth in September 2017. From there, ingredients such as tofu, onions, potatoes, roasted red peppers and the company’s signature Seitan sauce enter a mixer.

“You can see the cornucopia of ingredients and color. That’s one of the signature things about our food, with our packaging as well as our product,” says Brian. 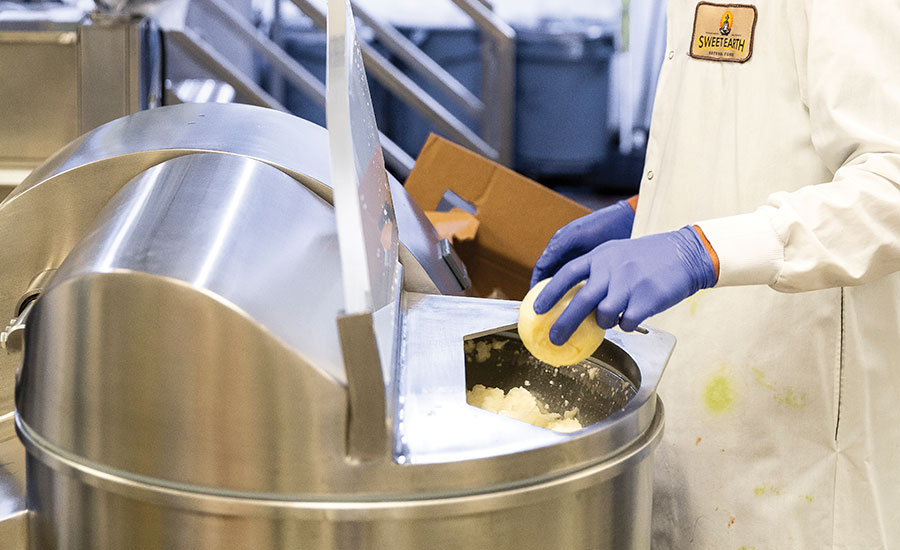 Here, an operator drops whole onions into an automatic slicer to be pureed for the Big Sur breakfast burrito.

“Our tortilla-to-fill ratio is the highest in the industry,” says Brian.

In Kitchen 3, Sweet Earth was producing its Benevolent Bacon, Egg & Cheddar breakfast sandwiches. How it works is, the cheese blocks come in, are hand-sliced and measured, then manually placed on the sandwiches along with bacon before entering a flow-wrapper and being transported into the freezer. 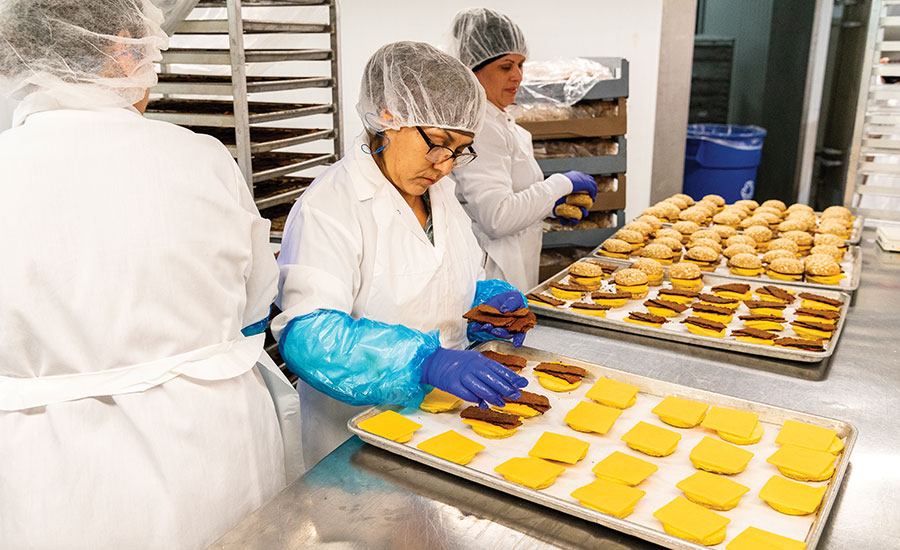 The Moss Landing plant receives 10-15 ingredients per day, which are used from the day of up to until two weeks, says Rochefort.

“The recipes are actually owned by Sweet Earth. They’re our proprietary recipes,” says Sarah Breen, quality manager. “We have a corn tortilla, flour tortilla and a flaxseed tortilla that we actually put in two of our bowls. And, then we have an organic hybrid of the two, it’s a cross between a white flour and a corn, which is really difficult to innovate because of the texture and the flakiness.”

“The bread is also our recipe,” adds Breen, who is one of the company’s first 6 employees. “The one thing that’s different about our factory as opposed to other food factories is we’re very much into the sensory. We actually taste our food on the line as it’s being made. We are constantly doing online sensory checks on all of our products.”

Plus, all of the leftover scraps are re-used in other products. For instance, bacon scraps go right into the Protein Lover’s burrito and the Baja burrito. 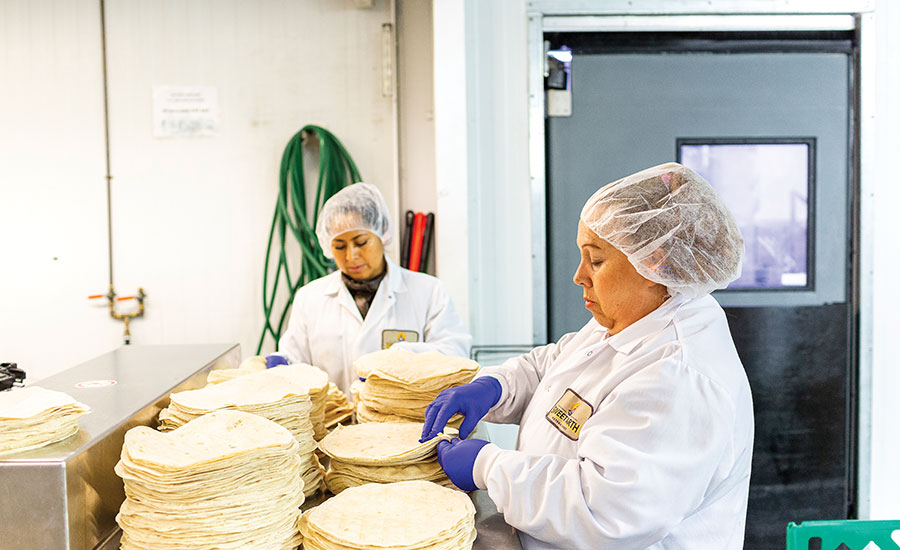 “Next year, we’ll be going through the GFSI certification. Having standardization throughout the factories is definitely a benefit. We can also utilize the other Nestlé factories as resources, which is a huge benefit to us, since we’re lean and mean,” Breen adds. 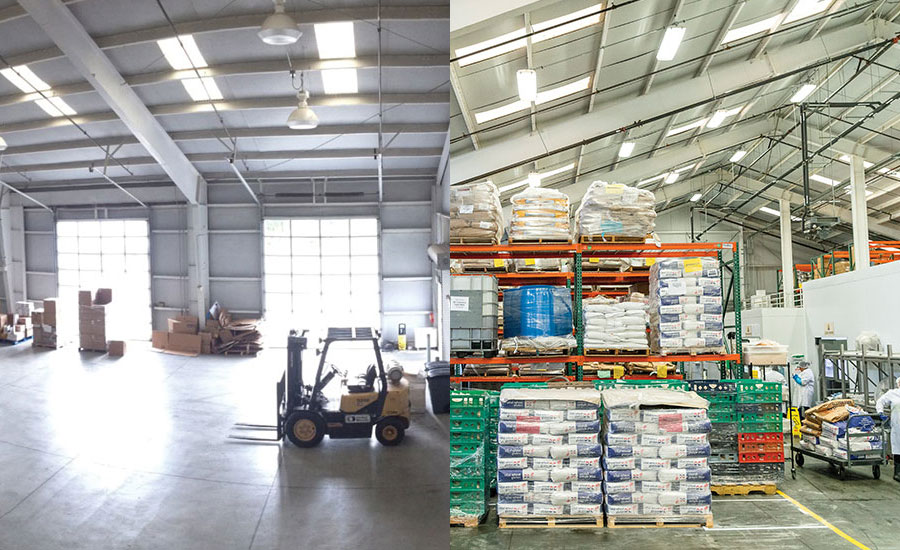 “One of the challenges for our production team is the ingredient complexity,” says Brian. “If you read our ingredient statement, it’s a clean ingredient statement in terms of every ingredient’s identifiable, but it’s a long list, and the reason for that is we believe in having complexity in flavor and texture. So, if one ingredient isn’t there, you can’t start the production; this is a very complex supply chain, especially for the size of the facility.”