Take a tour of the 200,000-square-foot Yuma, Ariz., facility, which manufactures more than 30 SKUs of Green Giant brand frozen vegetables and vegetable-based meals.

B&G Foods has built a reputation for acquiring struggling brands, and nurturing them back to new levels of success. That’s why in 2015, when it acquired the Green Giant and Le Sueur frozen and shelf-stable vegetable businesses from Minneapolis-based General Mills, Inc., the Parsippany, N.J.-based company was in position to redefine the frozen vegetables category.

Here’s how B&G Foods’ ability to continuously innovate and develop new products enabled it to make a giant-size footprint in the frozen foods market, and receive Refrigerated & Frozen Foods’ 2019 Frozen Foods Processor of the Year.

From field to table

The 50,000- to 60,000-square-foot vegetable processing room holds up to 2 weeks’ worth of zucchini, cauliflower and butternut squash, however vegetables are processed within about 4 days.

“We harvest at the peak of freshness and process them right away, locking in the freshness,” says Rick Drummond, vice president, R&D, innovation and consumer affairs.

Raw material such as zucchini, butternut squash and other vegetables enter the facility in fielding bins, which are then dumped before undergoing an initial wash. From there, operators manually clean each product, looking for defects and bruising, before the vegetables convey up to the spiralizer or dicer, blancher and the freezing process. 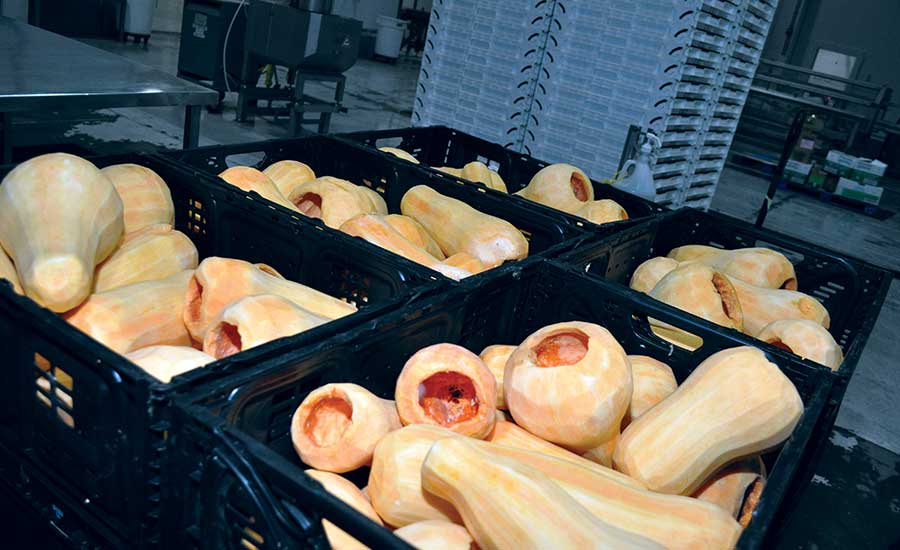 “The center, which is full of seeds, is actually pushed out and not used because producing a high-quality product is important to us. We use a specific type of zucchini that has as few seeds in the center as possible,” says Drummond.

From there, the spiralized vegetables enter the blancher and transfer to the pre-cooler, which brings the temperatures down from 200°F to 100°F before quickly entering the freezer, where the product chills down to below freezing for about 4 minutes.

After the product freezes, it enters another room, where the spirals convey up into the packaging room to be deposited into 12- or 24-ounce bags, then sealed and code dated. The bags also undergo a metal detector and checkweigher for additional quality control.

All vegetables then convey up into the blancher to be heated from room temperature to 200°F. 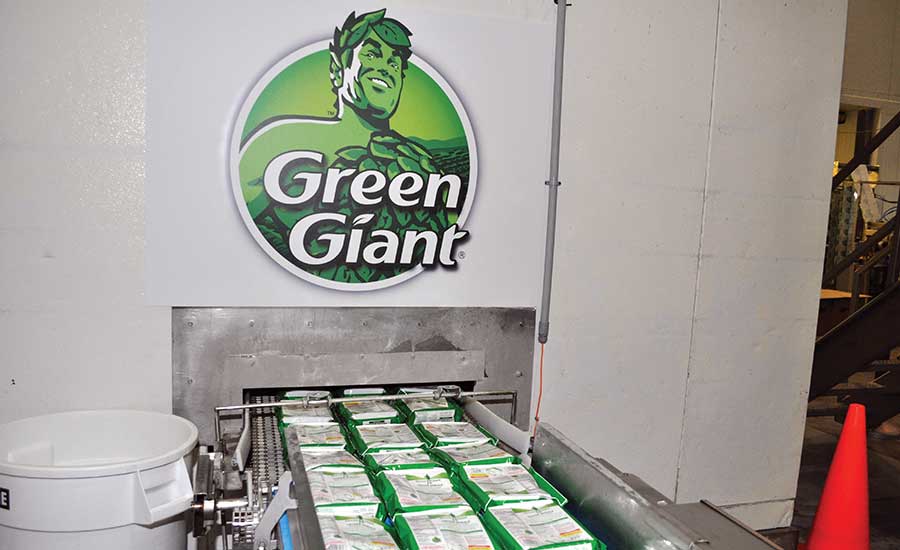 Once Green Giant Veggie Spirals are sealed, code dated and checkweighed, the packages convey into a blast freezer.

Cauliflower heads exit the cleaning stage and convey up to the dicer, where they are cut into rice-sized pieces. Then they enter the blancher, where they rotate in the cooker for 2-3 minutes at about 200°F, before being cooled.

From there, the pre-cooler brings the temperatures down from 200°F to less than 100°F in the wash before entering the freezer, where the product chills down at below freezing for about 4 minutes.

After the product freezes, it enters another room, where the riced cauliflower conveys up into the packaging room to be deposited into 10-, 12- or 40-ounce bags, then sealed and code dated. The bags also undergo a metal detector and checkweigher for additional quality control.

After packaging, Green Giant Riced Veggies convey into a blast freezer for up to 4 minutes.

“The magic of this cauliflower-based blend is that it tastes just like stuffing, but it’s yet another way to add more veggies to your plate, even during the holidays,” says Kristin Bradley, public relations manager. “Green Giant Riced Cauliflower Stuffing offers 45% fewer calories than stuffing. And, it’s gluten-free.”

The different vegetables are blended frozen with the dried cranberries in a different room to create a uniform mixture that is held in bulk frozen storage.

After the product freezes, the stuffing conveys up into the packaging room to be deposited into 12-ounce bags, then sealed and code dated. The bags also undergo a metal detector and checkweigher for additional quality control.